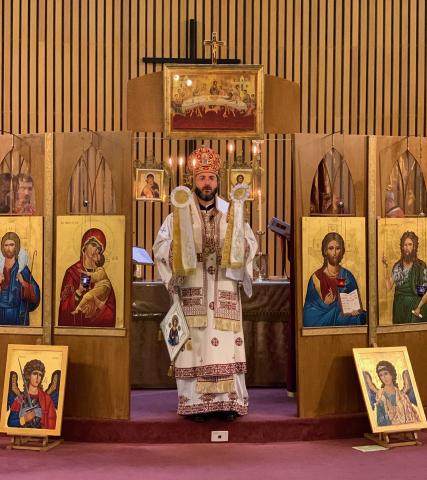 Exploring Orthodoxy 2019 was a remarkable worship experience and a celebration of the Orthodox witness to Jesus Christ the Son of God.

The day began with a Matins service led by the Antiochian Metropolitan Archbishop of Australia, New Zealand and the Philippines, His Eminence Basilios (Kodseie). The antiphonal contrast of Byzantine and Slavonic Polytonic chanting expressed the unity of the Orthodox Tradition within the diversity of multi-cultural Australia. 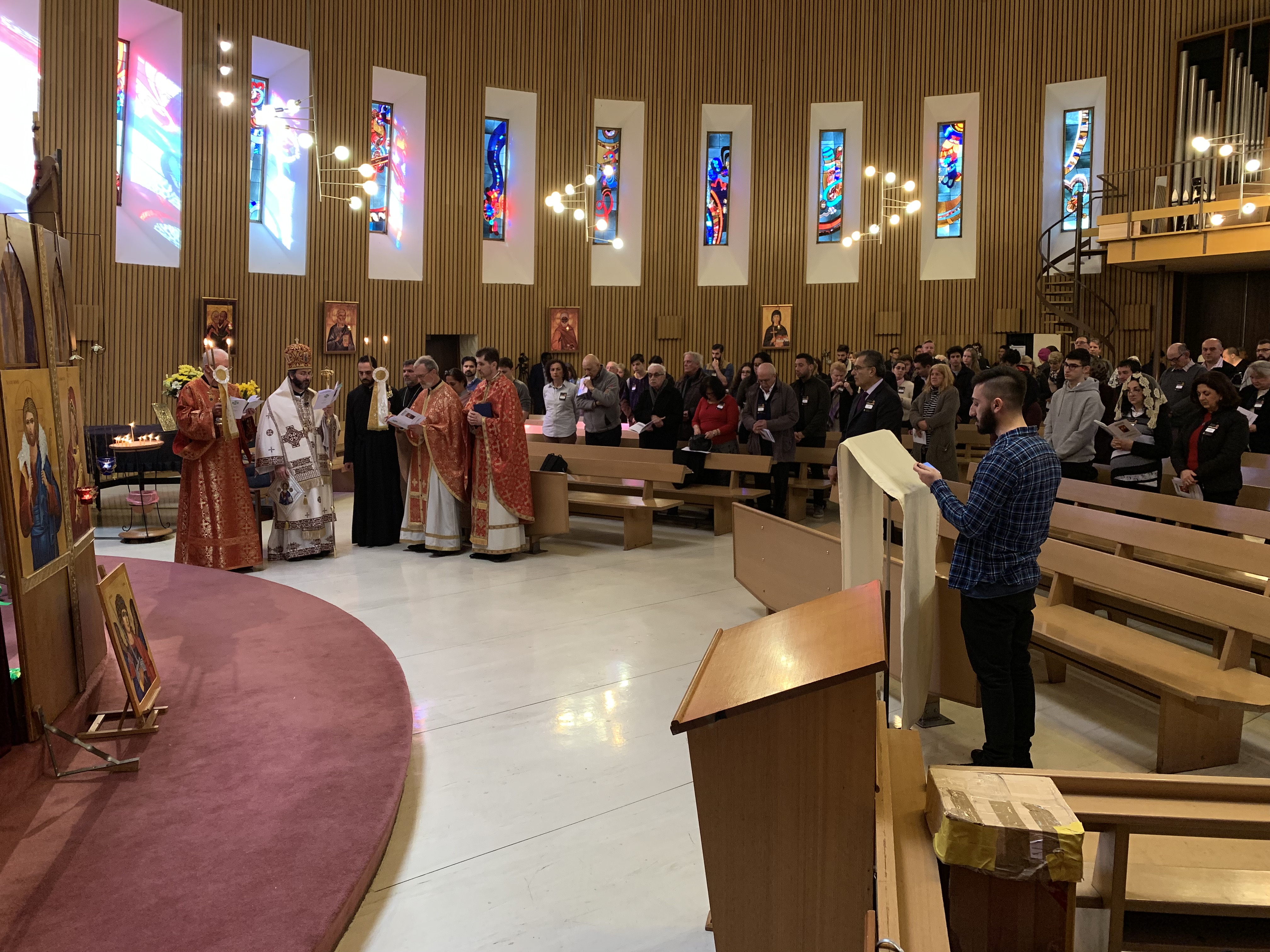 Simultaneously, Mrs Joanne Ball gave a presentation that introduced the Divine Liturgy for those unfamiliar with Orthodox worship. 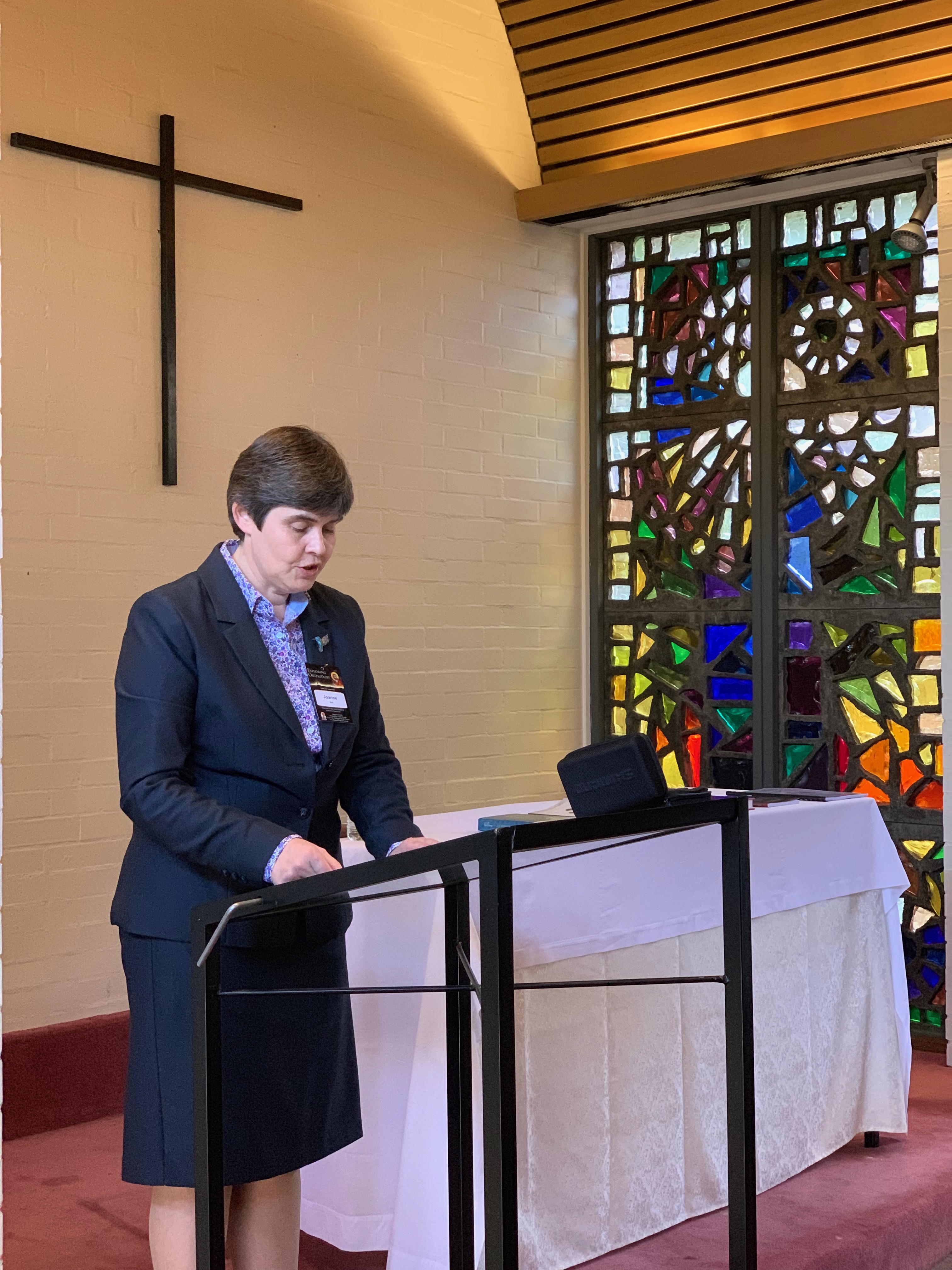 His Eminence, Metropolitan Basilios served the Hierarchical Liturgy and delivered the sermon. 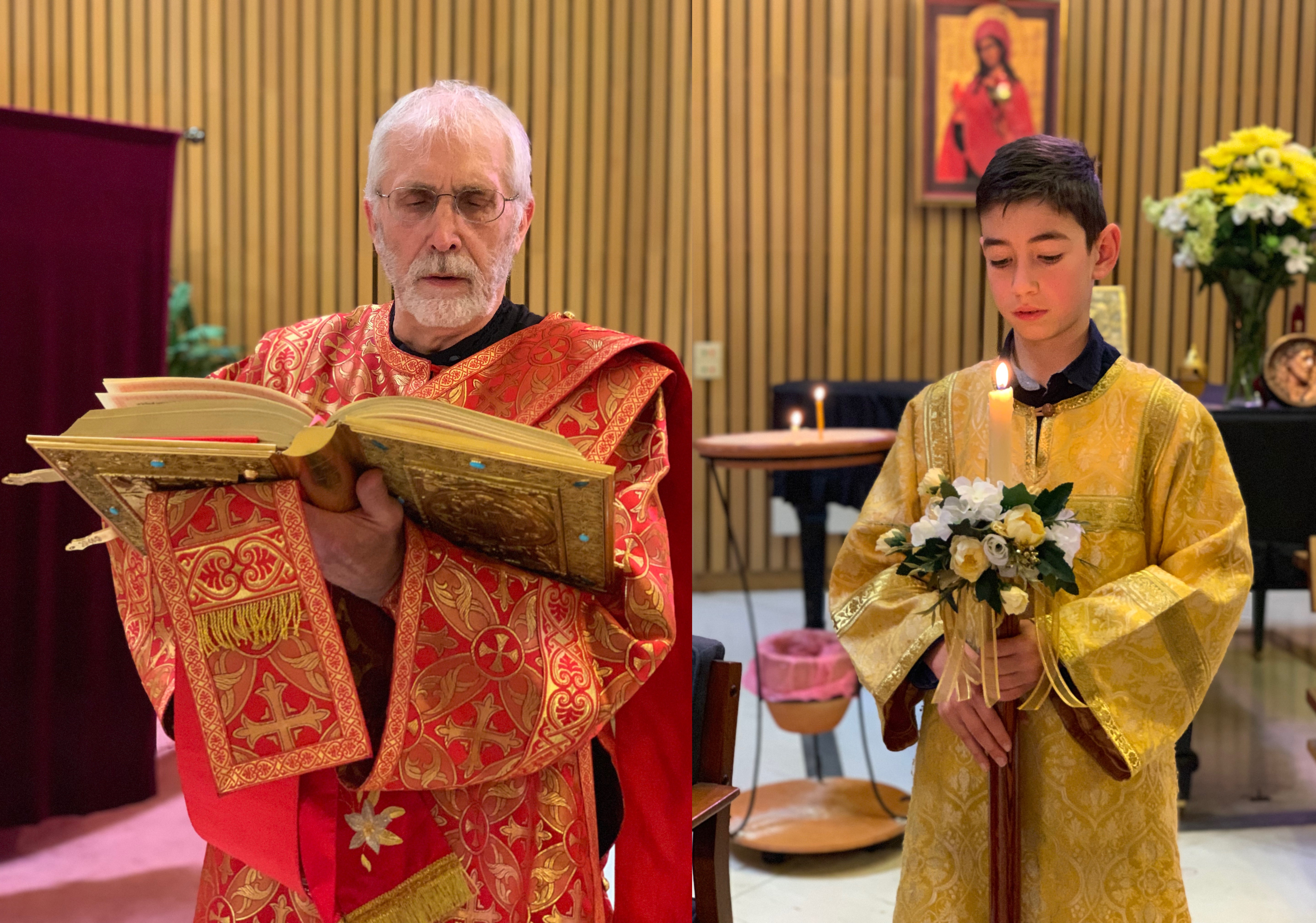 The atmosphere of the Divine Liturgy was breathtakingly beautiful. One of our photographers commented:

Even though I was busy with my task of taking photographs throughout the day, “God moments” kept breaking in and reducing me to tears.

The gathered congregation numbered just over 300 souls, making it the largest congregation in The Good Shepherd’s history.

The Good Shepherd’s choir was in glorious voice. They truly accompanied the angels. Johnny, from St. Paul’s in Dandenong (who participated with the choir during Matins) commented on his experience of the day.

It is a day I will never forget.

As a ‘cradle’ Orthodox who has recently renewed and reaffirmed his faith, it was truly a wonderful sight to behold Australians from a range of backgrounds gathering together in the name of Orthodox Christianity.

Being a parishioner of St Paul’s Antiochian Orthodox Church in Dandenong and an amateur Byzantine-tradition chanter, it was remarkable to hear the Divine Office of Matins and the Divine Liturgy of Saint John Chrysostom in a Polyphonic style of chanting. I was able to contribute what little Byzantine musical experience I had in order to share with those who were old and new to the parish of The Good Shepherd.

In addition to the beautiful, rich and divine service that was held in the presence of His Eminence Metropolitan Basilios, I met a variety of people and built new friendships in Christ that will hopefully last an eternity.

Being present on this day truly kindled a fire within me that longs to see the beauty and goodness of Orthodoxy spread to all who wish to ‘taste and see that the Lord is good’ in His fullness and completeness: which has been preserved, developed and taught within Orthodoxy since the beginning. 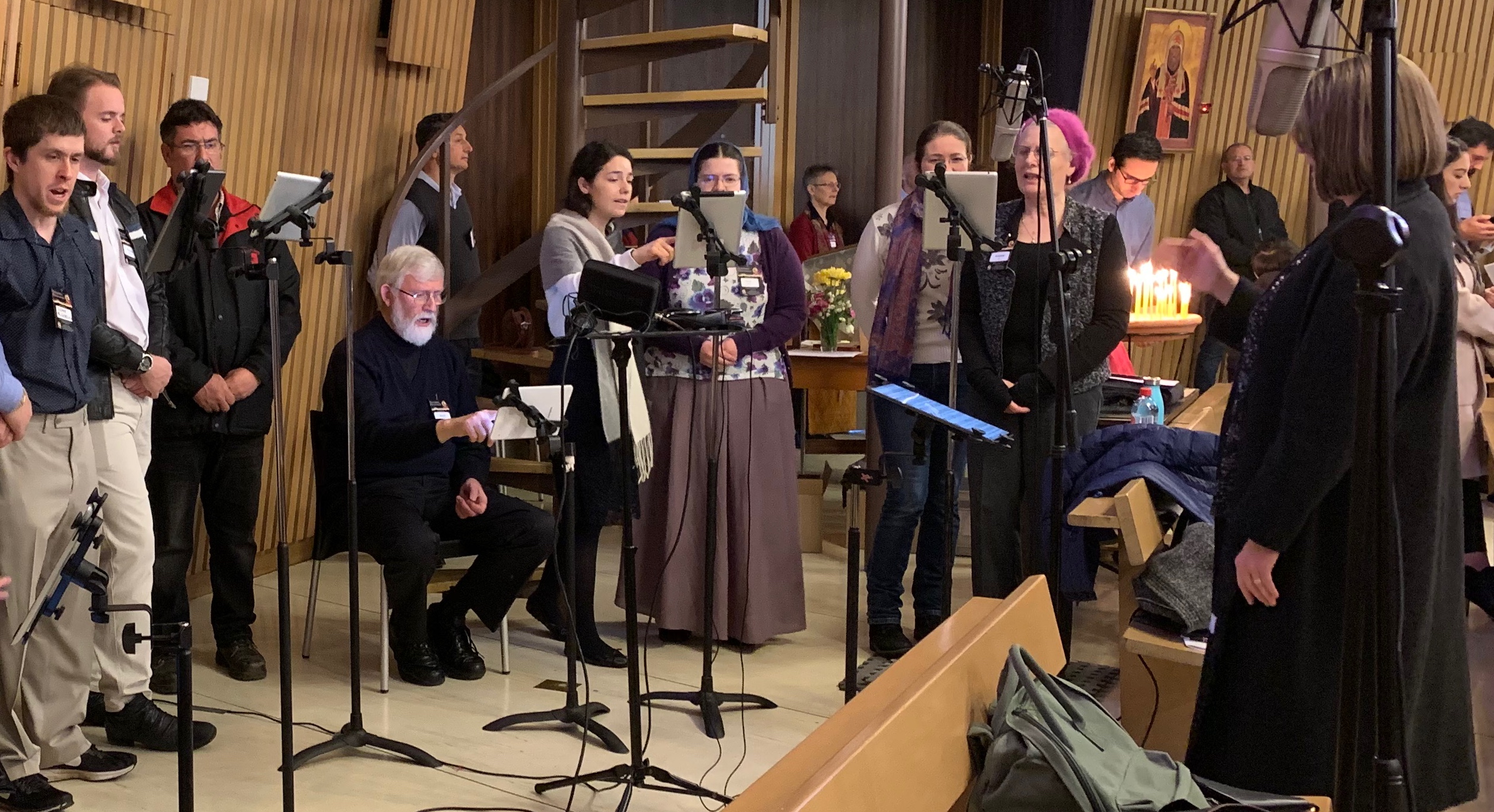 Holy Communion was served by His Eminence and the clergy. 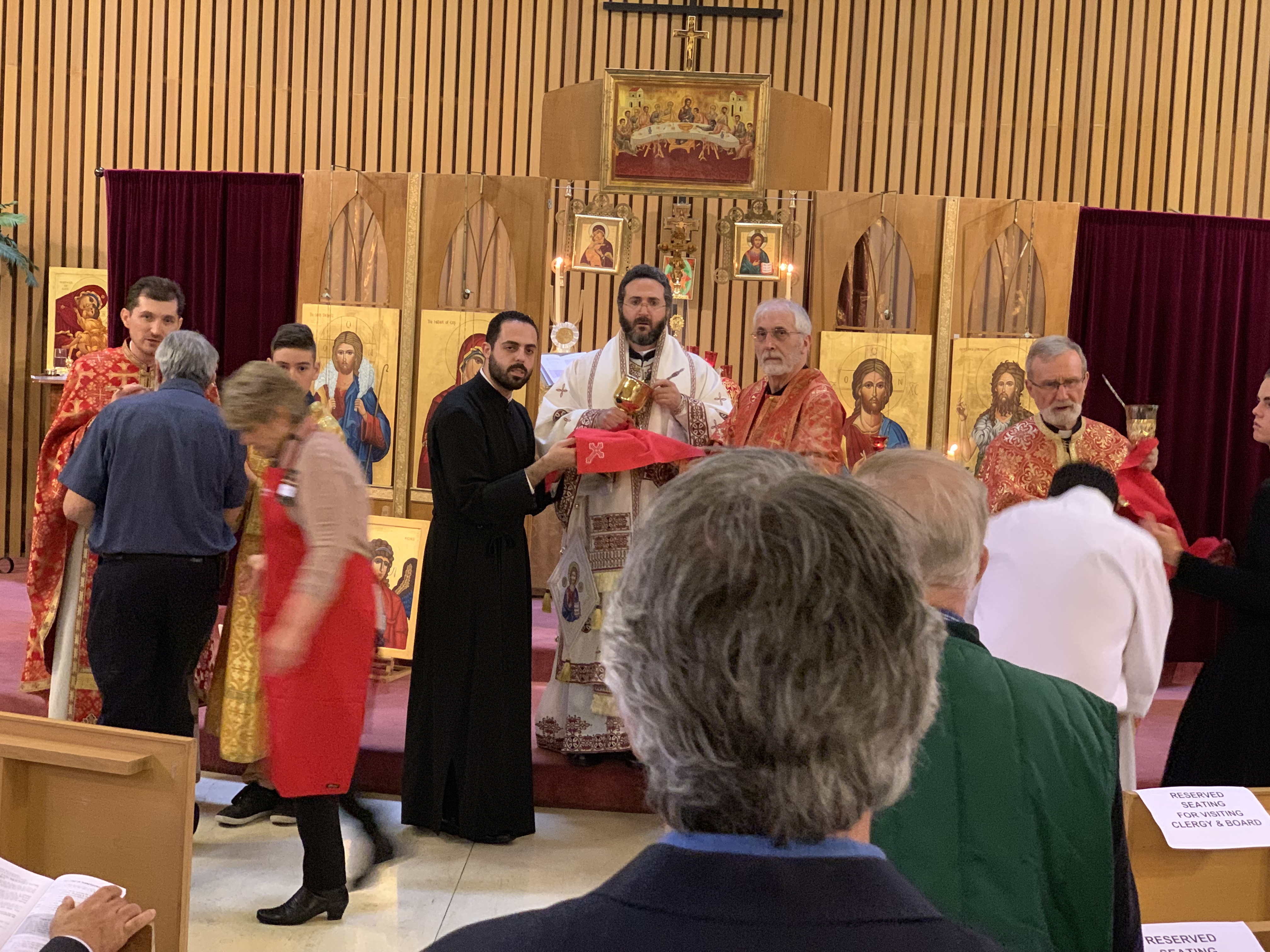 Immediately prior to lunch, we carried on The Good Shepherd’s customary singing of “Many Years” for those who have birthdays, name days and anniversaries. A visitor commented:

When they sang “Many Years” it just put a huge smile on my face!

His Eminence also appeared to enjoy The Good Shepherd’s custom.

During lunch, the congregation was wonderfully served with freshly made sandwiches, warm Middle Eastern savouries and homemade desserts, cakes and slices from a range of cultural origins. 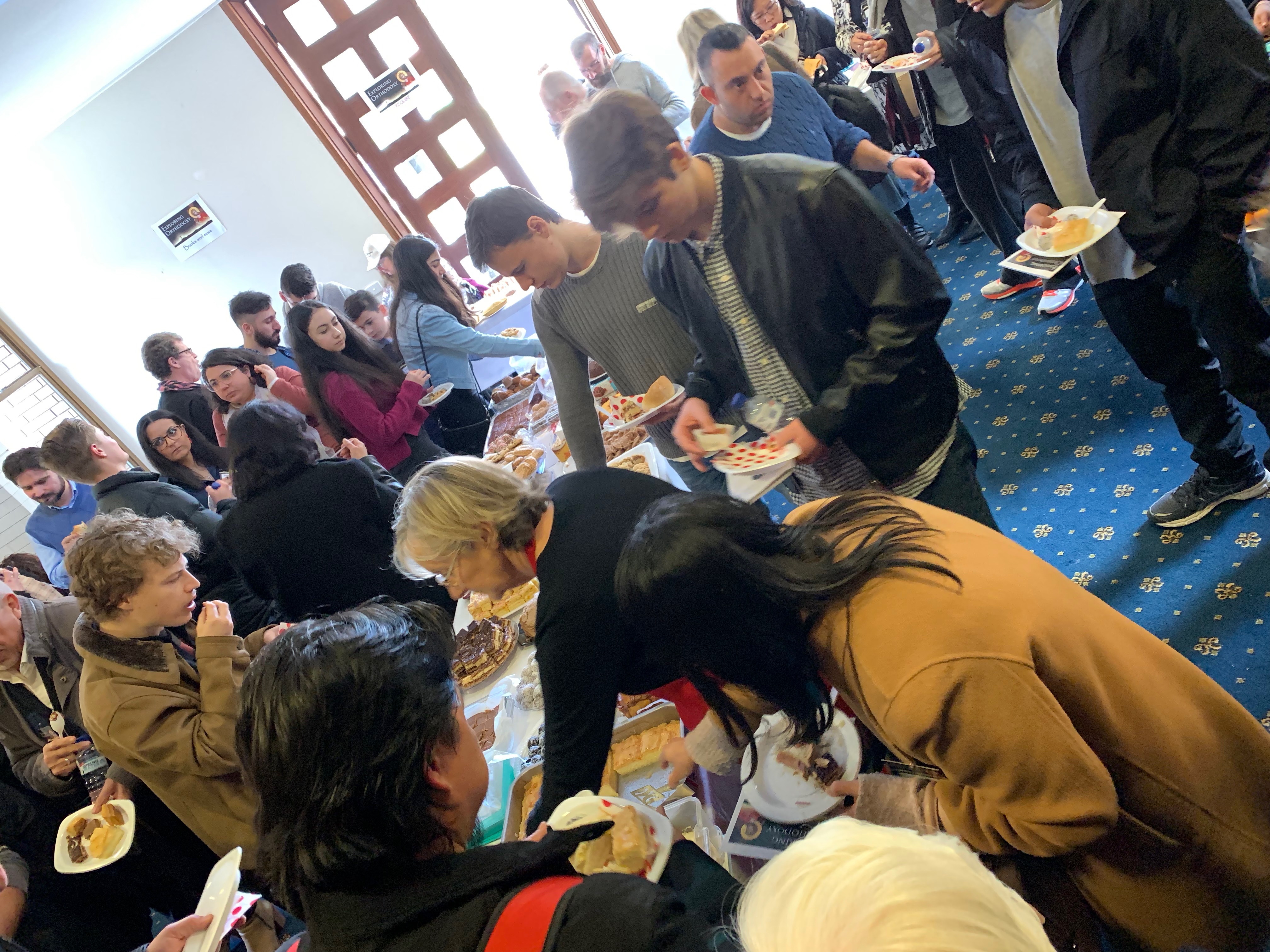 A bookstall introduced guests to select Orthodox books and an iconographer provided an icon demonstration. We had a wonderful opportunity to make new friends and renew acquaintances. One of our visitors said,

The food was fresh and plentiful. The day provided social connections and showed that The Good Shepherd Orthodox Church is not just a place to attend but a community to belong to — including young people. 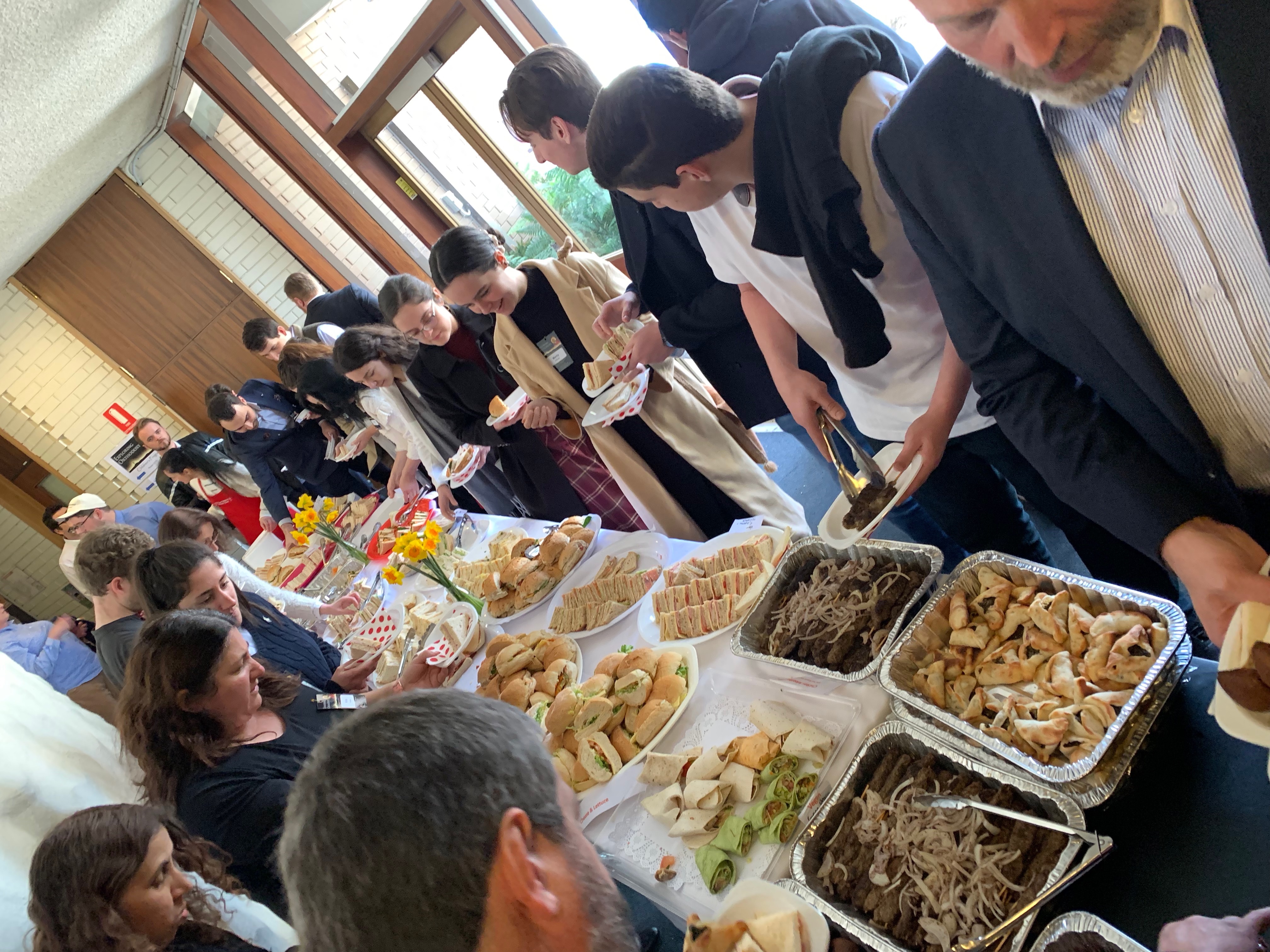 Meanwhile, I introduced the afternoon program with the message that the Orthodox should not think that they came to Australia merely by chance. While history books might say the Orthodox arrived in Australia as economic migrants or people escaping persecution, I believe that God has been moving powerfully to bring the Orthodox to Australia to play an important part in God’s plan. I encouraged the Orthodox in the congregation to understand their calling to work with the Holy Spirit in obedience to Jesus’ final command before ascending, which is commonly called “The Great Commission.” Hence the title of my talk: “Making the Commission Great Again!”

Australia’s 2016 census identified that only 52% of Australians classify themselves Christian, which means that nearly half of the Australian population does not follow our Lord Jesus Christ. As He told His disciples 2,000 years ago: “The harvest truly is plentiful, but the labourers are few. Therefore pray the Lord of the harvest to send out labourers into His harvest” (Matthew 9:37–38, Orthodox Study Bible). There is a great need in Australia for ‘labourers’ to be involved in carrying out our Lord’s last command.

To this end, we at The Good Shepherd Orthodox Church see the reason WHY we are here as follows:

With God’s blessing and presence, we desire to make the treasures of the Orthodox Christian faith accessible to the people of Australia in the English language so that they too can experience union with God the Father, God the Son and God the Holy Spirit, now and forever.

After my presentation, I invited two communicants from The Good Shepherd parish to describe how Orthodox obedience to the Great Commission has enriched them. Æthelwold spoke from the perspective of a recent convert from Protestantism who has found great healing within the Orthodox Tradition; Helena spoke from the perspective of someone born into a Greek Orthodox family who has been blessed by The Good Shepherd’s ministry in English.

Harry reflects on this portion of the program:

Exploring Orthodoxy was a wonderful day.

Father Geoff reminded us that all the Orthodox countries in the world today started out not Orthodox. Standing in the packed church (worshipping in the English language) gave me a sense of what the future might be like.

I, myself, was not-Orthodox a short while ago. I was actually an atheist. But God, for reasons obscure to me (and in a shockingly short period of time) turned my life around.

Prior to this I had never considered or thought about becoming Christian, in any capacity. If someone had asked me a couple years ago the odds that I would be singing in a church choir every week, I would have said, “Zero to none.”

This leads me to the thought that while the conversion of a nation (which Fr. Geoff talked about in his presentation) may seem an impossible task, the impossible is what God trades in everyday. So it seems to me that the more unlikely we humans deem a task, the more likely God will ensure it is done.

From this viewpoint, the conversion of nations is not unlikely, but in fact a dead certainty.

Fr. Doru then presented his talk, “Charismatic Experiences: The Philokalia's Burning Hearts.” In this talk he observed that the non-Christian world has stopped listening to Christian sermons. Now they need to ‘hear’ the Christian message through Christian lives being lived. Fr. Doru expanded on how the physical presence of the Holy Spirit provides the energy for this transformation in the presentation of the Gospel. 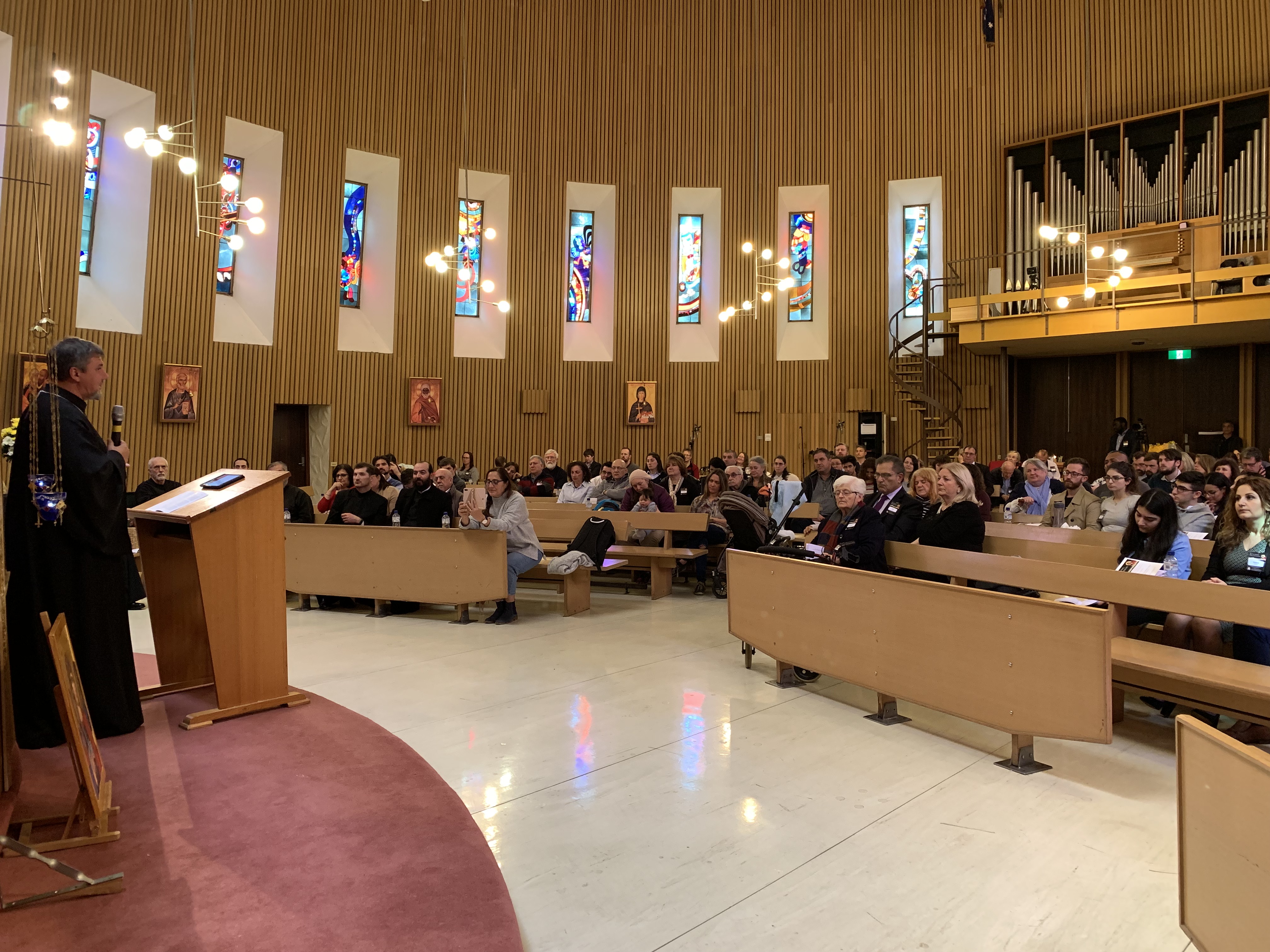 Fr Doru’s talk was the highlight of my day, expressing wonderful insights such as: we need to make Orthodox spirituality palpable by being what we are meant to be, rather than by signs and wonders.

His division of charismatic experiences into external and internal made sense of that and I was particularly encouraged by him talking about the ‘warmth of the heart’ as an internal sign of the presence in us of the Holy Spirit, which strengthens in us the purpose of the Christian life, theosis.

Fr Doru’s statement that faith gets a tremendous ally in signs such as the warmth of the heart, encourages me to take more notice of this gift, to be grateful when it occurs, and to have more faith in the Giver.

I was particularly interested in Fr. Doru's thoughts on “burning hearts.”

We all understand that “right belief” is nothing without “right practice.” As the Metropolitan pointed out, we’re never going to achieve eternal life solely by thinking, and that whatever we learn in Orthodoxy must be put into practice in our daily lives. But we seldom hear comment about the physical expressions that can accompany a personal experience of God’s presence.

Fr. Doru notes that we Orthodox are generally reticent about putting ourselves forward and talking about how we experience God. So it was encouraging to hear that many of the Philokalic authors have written quite directly about the charismatic experience of the saints.

His Eminence, Metropolitan Basilios then presented the keynote talk of the conference. His talk, “Introduction to The Philokalia: How it helps spiritual renewal and how it has influenced modern Orthodox spirituality” provided an expert introduction to the Philokalia. Æthelwold summarises and responds to His Eminence’s topic:

In his keynote speech, Metropolitan Basilios laid the foundations for our understanding of the Philokalia as both an historical textual tradition as well as a current living tradition.

He recommended that everyone new to the Philokalia should seek to gain exposure to it by reading The Way of a Pilgrim, an anonymous nineteenth century novel that introduces the Philokalic tradition in a very engaging manner.

He advised that we should think of the Philokalia as an entire library of material that encapsulates monastic tradition, and that when we seek to read the Philokalia, that we would benefit from a guided reading of the material (it isn’t designed to be read from front to back).

His Eminence emphasised that the Philokalia is a living tradition. Its content has been expanded within the Russian tradition, and its influence on the Church has been profound.

I’m now eager to begin my exploration of the Philokalic tradition by reading The Way of a Pilgrim. 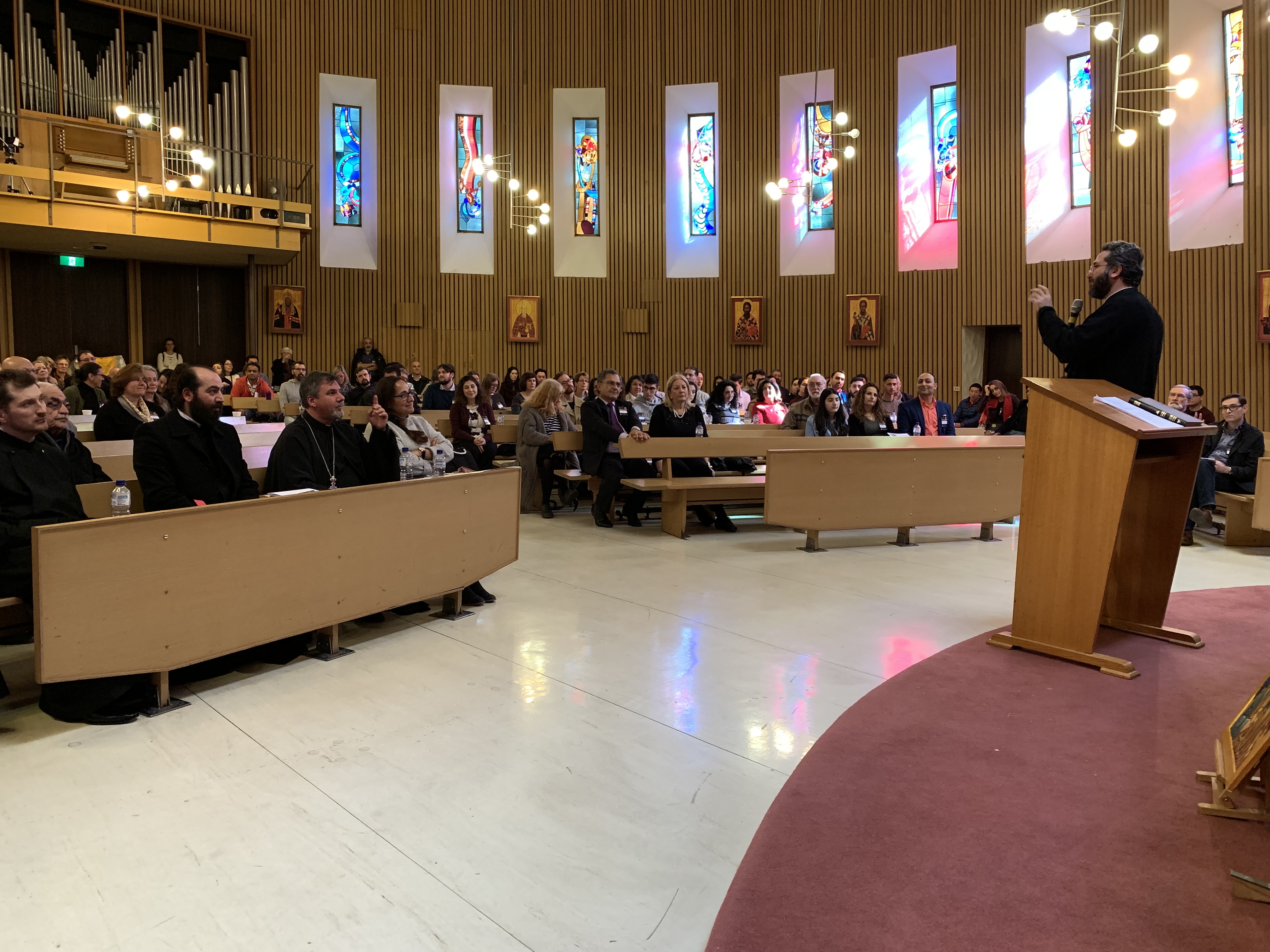 A note of thanks for the wonderful day on Sunday. It was an amazing experience and I came away feeling grateful and blessed for the opportunity to be part of the morning service and to learn from such wonderful speakers.

The day invited people to see the beauty of what true spirituality could be. Orthodoxy feels like so much more than the shallowness of other forms of worship — with Orthodoxy you are stepping into rich, deep roots.

It really showed how the strength of Orthodoxy is based on ten centuries of ascetic life and connection with God. It raised my curiosity about “the burning heart” and raised my awareness of poisonous spirituality — which is a short term “junk food” that is on sale everywhere through yoga, retreats and so on.

The Holy Spirit is clearly at work here, drawing people into the fullness of the faith and the life of Christ.​

I’d like to leave the final word to Meredith, who relates the Metropolitan’s and Fr. Doru’s talks to her personal experience.

All my life I have sought Truth and a Tradition that would authentically form me in the Truth. I eventually found both in Orthodoxy.

The Bishop revealed the connection between my need to find both the Truth and the right Tradition that articulated that Truth. He explained that it is only when we engage in the right practice (Orthopraxy) that we discover the right faith and worship (Orthodoxy). We become what we do and, as right worship is the highest expression of our humanity, the practice that enables right worship transforms us.

The Orthodox Tradition teaches these practices with a richness and beauty that is stunning to the newcomer.

Fr Doru Costache (in a teaching that one attendee described as “gold”) articulated the experiential consequences of Orthopraxy. Just as the hearts of the disciples burned within them as they walked with Jesus on the road, so too our hearts can come to burn with love for God as we increasingly embrace the practices of Orthodoxy.

I pray that The Good Shepherd will more and more be a light on a hill for Australia, and a means of revealing the glory of God.

And to thank His Eminence and the clergy who served at this event. 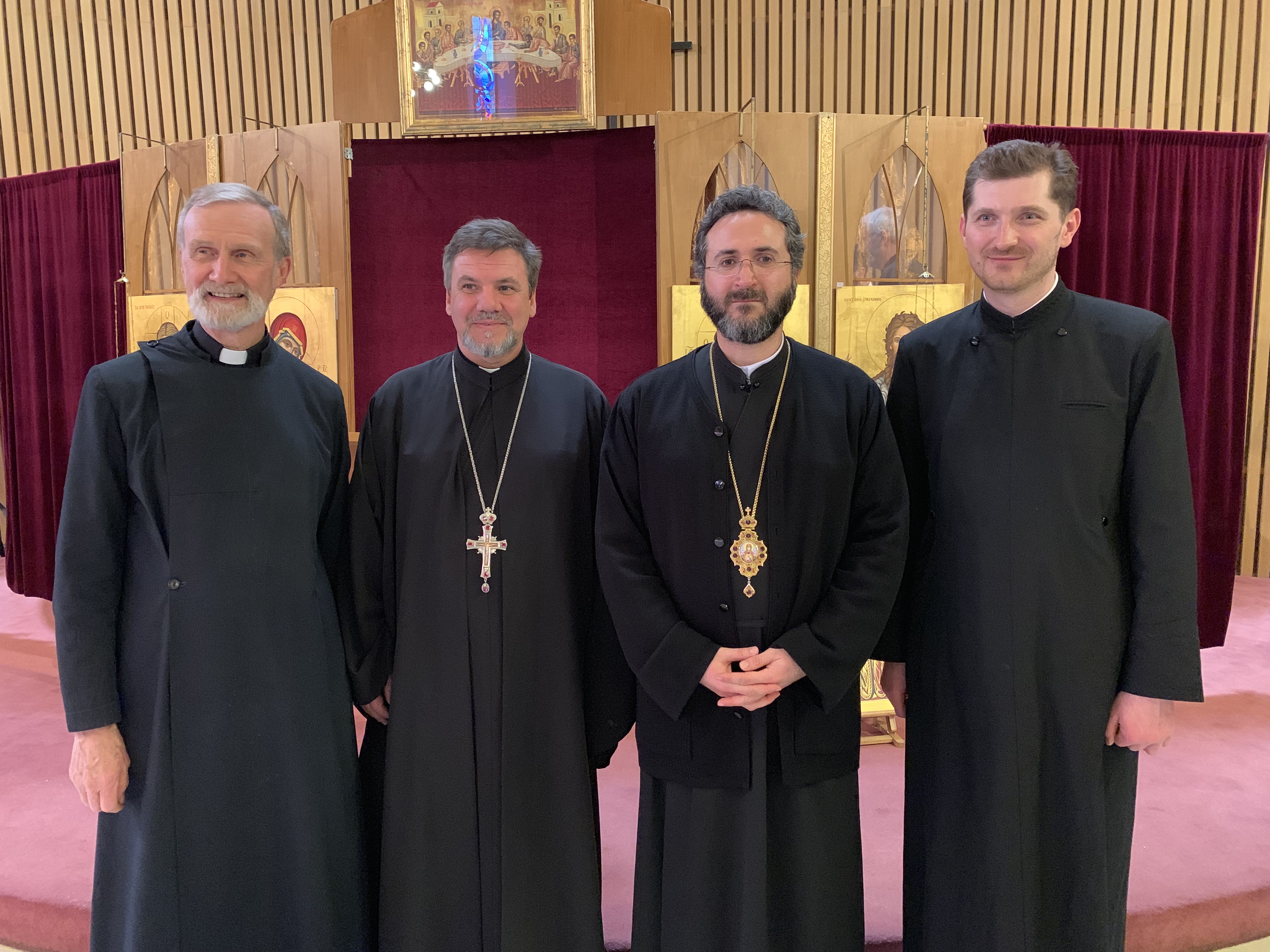