How to Experience God 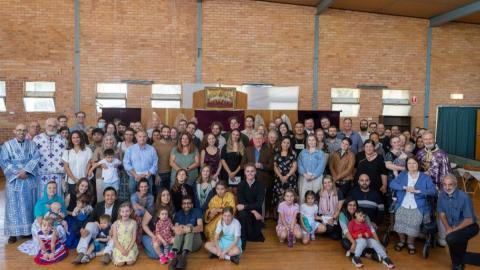 The knowledge of God, generally spoken of in a very experiential manner, is an absolute foundation in Orthodox theology. Nothing replaces it — no dogmatic formula, no Creed, not even Scripture — though Orthodoxy would see none of these things as separate from the knowledge of God. But the questions I have received are very apt. In a culture that is awash in “experience,” what do the Orthodox mean when we speak of such things and what do we mean by such knowledge of God?

The Knowledge of God

There are two Scriptural passages in particular that come to mind when I think of this subject. The first from the Beatitudes (Matt. 5:8):

Blessed are the pure in heart for they shall see God.

Beloved, now are we the sons of God, and it doth not yet appear what we shall be: but we know that, when he shall appear, we shall be like him; for we shall see him as he is. And every man that hath this hope in him purifieth himself, even as He is pure.

Obviously I equate “seeing” and “knowing,” as does the Tradition. In both of these verses the knowledge of God (“seeing God”) is tied to purity of heart. We do not see or know God because our hearts are darkened by sin and ignorance. Thus any knowledge of God that we have in this life begins as gift and remains as gift. However, it is a gift that is more fully received as our hearts are purified. The importance of speaking of knowledge of God in this manner is to prevent two equally devastating errors. One would be to have a knowledge which is based only on the data of revelation, and only known as we know other data (like the multiplication table).

As an Orthodox Christian I accept the teaching of the Church precisely because I am not pure of heart and I am not competent in and of myself to judge these things. I trust the saints and hierarchs of the ages, under the Holy Spirit, to have spoken truly of what they know and of what they have received. The Orthodox “experience” if I can use such a phrase, is the confirmation in the heart of the truth we have received as we grow in grace and in purity of heart. But the truth of the faith must be confirmed in such a living manner or it simply becomes an historical item and the Church would be a collection of antiquarians and not the living temple of God. For my knowledge of God is also my life in God.

Life, light, truth, knowledge — all of these have something of a synonymous character. In accepting Christ as He has given Himself to us in His Church, we are also accepting knowledge of Him as it has been given to the Church. Private revelations (experiences) tend to be received with great skepticism either because of the spiritual dangers involved (delusion, etc.) or because of our own spiritual incompetency (sin). None of this is an effort to disparage knowledge of God in a way that is “experiential,” that is, more than merely rational, but it is an effort that recognises that such experience of God is itself part of our healing from darkness, death and sin. And just as that healing is a slow and steady progress — sometimes even a regression — so too our knowledge of God is slow, as we (hopefully steadily) grow in grace and purity of heart.

There is a passage in one of my favorite spiritual novels, A Pilgrimage to Dzhvari, (written by the mother of Bishop Hilarion Alfeyev). In it, a mother and her son make pilgrimage to a monastery in Georgia. The woman is bright, intelligent and a fairly recent convert to the faith (having been previously a non-believer). In a conversation with the Abbot, she asks some questions about a passage in Maximus the Confessor. The Abbot reacts with alarm, “You’ve been reading the Fathers?” She replies in the affirmative. He is concerned that she may have done herself damage. “You should never read more hours in a day than you pray,” was his admonition. His concern is that she not come to a place of imbalance — where the knowledge that fills her mind outstrips the knowledge that fills her heart. Such knowledge, acquired without ascesis (prayer, fasting, repentance, etc.) is the knowledge of which St. Paul warns when he says, “Knowledge puffs up” (makes us proud). It is by no means a celebration of ignorance, but rather a deeper diagnosis of precisely the kind of ignorance that poisons our souls.

I have known brilliant men and women, with degrees from very prestigious institutions, indeed with degrees in various forms of religious disciplines, whose knowledge of God was less than my average catechumen, but whose very “knowledge” reduced the possibility of discovering their ignorance and coming to a knowledge of the truth. Again, knowledge that is not accompanied by ascesis is dangerous — no matter whether the knowledge is of an academic character or of a mystical character. We cannot know God and at the same time not be like Him to some degree. Such conformity to His image is itself a result of such knowledge.

It is for this reason that the Scriptures tell us that “by their fruit you shall know them.” If someone claims knowledge of God, but his life is not in conformity with the commandments of Christ, then we know that what we are hearing is largely delusional in character. What should we do? First, we should pray, fast, repent of our sins, seek to forgive our enemies and do good to all around us. These are clear commandments of Scripture. With such efforts, as God gives us grace and changes our heart, we begin to know. The writings of the Fathers are generally the writings of saints. We will not understand them without ourselves seeking to become saints. All of this, of course, is slow and difficult — but we are talking about reality and our salvation not simply the acquisition of information. It is, of course, proper, even necessary to study the faith, but this is something we should do with a primary concern for the salvation of our own souls and not the correction of others. The Scriptures tell us in James 3:1:

Let not many of you become teachers, my brethren, for you know that we who teach shall be judged with greater strictness.

The Experience of God

Neither should we avoid religious “experience,” though this has gotten something of a bad name on account of numerous abuses within the Christian world of today. But like knowledge acquired by study, knowledge of God gained by experience should be accompanied with ascesis as well. Much of modern Pentecostal and Charismatic teaching has offered false information on religious experience to an audience of Americans who wants everything. Too often we want the interior life of Mother Teresa and all of the shoes of Imelda Marcos. It just doesn’t work like that.

The story is told in the Lives of the Desert Fathers that one of the Fathers was praying when the devil sought to trick him. A demon appeared in the cell of the monk who was in prayer and said, “I am the angel Gabriel sent from God.” Without looking up the monk replied, “You must be in the wrong cell. I am not worthy for an angel to visit me.” The demon disappeared, defeated by the humility of the monk. This is a description of the proper state of our heart. We desire to know God, but we want to know Him deeply enough, that we refuse to settle for anything less. Much of modern religious experience, as witnessed by its fruit, has little to do with the true God. Study. Pray. Fast. Give alms. Forgive your enemies. Repent of your sins. Cry out to God for mercy. He is a “good God and loves mankind.” He will not leave us in the dark nor ignore the cry of our hearts. “This is eternal life,” Christ says, “To know Thee, the only true God, and Jesus Christ whom Thou hast sent.” Thus we pursue knowledge — true knowledge in the way and in the manner given to us as though our life depended on it. Because it does.

Read more from Fr. Stephen Freeman at “Glory to God for All Things” blog.

We are a vibrant Australian Christian community under the direction of the Antiochian Orthodox Archdiocese of Australia, New Zealand & the Philippines, which belongs to the jurisdiction of the Greek Orthodox Patriarchate of Antioch and All the East.