The Martyrdom of St Timothy 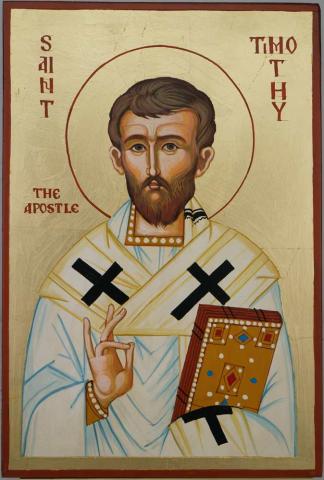 St Timothy was born c. 17 AD in Lystra, Asia Minor, and was converted through the ministry of St Paul in the year 52. Soon after, the Apostle took him on a journey to Macedonia.

St Augustine extols his zeal and faith for his ability to forsake the comforts of his life (his country, his house and his family) to live in poverty and suffer with the Apostle. He became St Paul’s co-worker and companion, receiving two letters from St Paul that are today found in the New Testament. He had a close relationship with St Paul and the Apostle entrusted him with "missions of great importance".

Like St Paul, he was imprisoned during the writing of the New Testament. His release from jail is mentioned at the end of Hebrews. Although ancient records do not state the exact reason for his imprisonment, it is likely to be because of his affiliation with St Paul and his preaching of the Gospel.

St Paul said of him, “I have no one like him” (Phil.2:2) due to his devotion to the Faith. St Timothy was ordained the first bishop of Ephesus (located in modern-day Turkey) and served there for 15 years. The end of his service came when he was martyred by a mob of pagan worshipers. During the immoral festival of Katagogian, St Timothy tried to stop a procession honouring the goddess Diana by preaching the Gospel. Unfortunately, the pagans did not receive this well and beat him, dragged him through the streets and stoned him to death.

Today St Timothy is a patron saint to many and is invoked by those suffering stomach disorders. Many believe this to be because of his own suffering. Paul wrote in his first letter to Timothy: "Stop drinking only water, but have a little wine for the sake of your stomach and your frequent illnesses" (1 Timothy 5:23).

Hearing the Lives of the Saints

Here at The Good Shepherd, Subdeacon Timothy relates to us a Life of a Saint every week just before communion. He tells us about their struggles so we can personally connect and identify with them, and it helps provide some perspective on our own lives.

Like other Orthodox parishes, The Good Shepherd encourages a deeper understanding of those who came before us. And it’s just as important to ensure that not only are we growing closer to the Saints, but to each other as well.

There is always more to learn about one another at The Good Shepherd. We know that our Subdeacon gives us weekly insights into the feasts and saints of the Orthodox calendar, but who among us knows why Subdeacon Timothy chose St Timothy as his patron saint? Let’s find out!

A Question for Subdeacon Timothy

“Why did you choose Timothy as your patron saint?”

Subdeacon Timothy: “I didn't choose my baptismal name. It was the name my parents gave me as a child. My parents liked that it meant, “Honouring God”. As a child, I always felt a connection to St Timothy because St Paul gives St Timothy advice that I felt I could apply to myself. Here’s an example: “Let no one despise your youth, but be an example to the believers in word, in conduct, in love, in spirit, in faith, in purity” (1 Tim. 4:12). Like St Timothy, I struggled as a young person with shyness and timidity. My patron saint was apparently similar, as he needed reminding that “God has not given us a spirit of fear, but of power and of love and of a sound mind” (2 Tim. 1:7). When I became Orthodox, I decided to keep him for my patron saint since the picture we get of him in the New Testament is one of faithfulness, holiness, steadfastness and heartfelt devotion to God and others—all things I need desperately in my life.”

As Orthodox Christians, we learn much about the lives of the Saints, but it is just as important to learn about each other's lives. Personal relationships help build our parish.

We would love to hear how you came to choose yours.