Symeon the New Theologian on the Eucharist

St. Symeon was the Abbot of St. Mamas Monastery in Constantinople. His writings date from around 1003 AD. He came from an influential political family that was swept from government when he was six. Trained to be a government official, he was leading a religious but worldly life in his early twenties.

One night while saying his prayers, His life was dramatically transformed by a vision of the uncreated light. Wanting to follow the calling of God into a monastery, his spiritual father advised him to stay in his courtly role.

A number of years later, his party in court was swept from power, and he was forced into the monastery. (Being consigned to the monastery was a way of sidelining political rivals.) Unlike many court officials, Symeon thrived in the monastery, dedicating himself to pursuing the mystical life and training the monks around him to do likewise.

Prior to the excerpt below, St. Symeon had been teaching about spiritual perception. While mankind has five separate senses, St. Symeon teaches that the revelation of God by-passes the senses in a way that unifies them. Thus someone may simultaneously experience the uncreated light affecting one's sight, hearing, smell, taste and touch.

In this passage, St. Symeon describes the spiritual nature of communion in the Body and Blood of Jesus Christ.

The Eucharist as Spiritual Revelation

Do you want me to tell you what the good things are which eye has not seen nor ear heard, nor the heart of man conceived? (1 Corinthians 2:9)

I say that the ineffable speech which Paul heard spoken in Paradise (2 Corinthians 12:1–10) were the eternal good things. These things, which God has prepared for those who love Him, are not protected by heights, nor enclosed in some secret place, nor hidden in the depths, nor kept at the ends of the earth or sea. They are right in front of you, before your very eyes. So, what are they?

Together with the good things stored up in heaven, these are the Body and Blood of our Lord Jesus Christ which we see every day, and eat, and drink.

These, we avow, are those good things. Outside of these, you will not be able to find one of the things spoken of, even if you were to traverse the whole of creation. If you do want to know the truth of my words, become holy by practising God’s commandments and then partake of the holy things, and you will you know precisely the force of what I am telling you.

But for further confirmation, listen to the words of the Lord Himself when He speaks thus to the Jews and to His own disciples:

So, then, you must not be like the Jews as well, muttering and saying: “Is not this the bread on the discos and the wine in the chalice which we see every day, and which we eat and drink? How does this man say that these are those good things which eye has not seen, nor ear heard, nor the heart of man conceived?”

Listen instead to what the Lord said in reply to them:

“Do not murmur among yourselves. No one can come to Me unless the Father Who sent me draws him; and I will raise him up at the last day.

He says, as it were: “Why do you disbelieve and doubt this? No one can know My divinity—for this is the same as to ‘come to Me’—unless my Father draws him.”

In speaking of attraction, He makes it clear that there is no compulsion, but rather that He has invited through revelation those whom He foreknew and predestined, it being evident that he attracts them by virtue of their love for the One Who is thus revealed to them.

This is indicated still more clearly in the following: “It is written in the prophets, ‘And they shall be taught by God’” (John 6:45).

How can this man give us His flesh to eat?

So Jesus said to them: Truly, truly, I say to you, unless you eat the flesh of the Son of Man and drink His blood, you have no life in you. He who eats My flesh and drinks My blood has eternal life, and I will raise him up at the last day. For My flesh is food indeed, and My blood is drink indeed.

You have heard that the communion in the divine and immaculate mysteries is everlasting life and that the Lord says He will raise up at the last day those who have everlasting life. This is not, certainly, that anyone else will be left in the tombs, but that those who have life will be raised by the Life to life everlasting while the rest are raised to the eternal death of damnation. And, that this is the truth, listen to what follows: 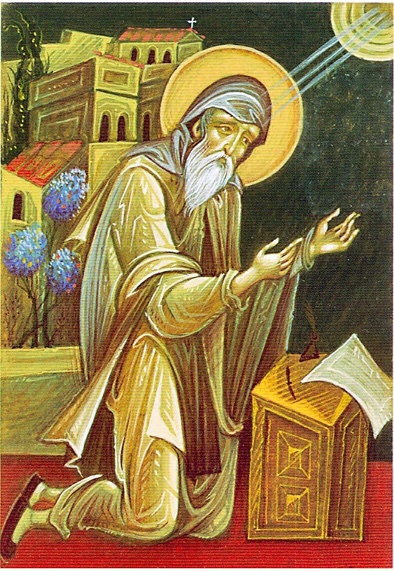 Do you see what He is saying? The Son of God cries out plainly that our union with Him through communion is such as the unity and life which He has with the Father. Thus, just as He is united by nature to His own Father and God, so are we united by grace to Him, and live in Him, by eating His flesh and drinking His blood. And, in order that we do not think that everything is reduced to the visible bread, He says several times on this account: “I am the bread which comes down from heaven.”

Now, He did not say “Who came down,” because this would indicate that the “coming down” was a one-time event. What then? He says, “Who comes down,” clearly because He is always and forever descending on those who are worthy, and that this occurs both now and at every hour. And more: detaching our minds from visible things, or better, leading us up through them to the invisible glory of the divinity in His Person, He says, “I am the bread of life” (John 6:48); and again: “My Father gives you bread not from the earth, but the true bread from heaven” (cf. John 6:32). When He said “the true bread from heaven,” he indicated that the bread of earth is false and that it profits nothing.

Now, in order to make this still more clear, he says: “The bread of God is that which comes down from heaven, and gives life to the world” (John 6:33).

Once more He says “comes down,” and “gives life.” Why is this?

So that you should suspect nothing physical, nor conceive anything earthly, but instead see this bread with spiritual eyes, and see that this little particle is made divine, and has become altogether like the bread which came down from heaven, which is true God, both the bread and drink of immortal life; so that you should not be content with unbelief and with just the visible bread which is perceived by the senses, and so not eat the heavenly, but only the earthly bread, and thus be deprived of life for not having eaten the heavenly bread in spirit.

So Christ Himself says: “It is the Spirit which gives life; the flesh profits nothing” (John 6:63). Whom, then, does it not profit? Those, he says, who say He is merely a man, and not God.

Therefore, if you, yourself a believer, partake of mere bread and not of a deified body when receiving Him—the whole Christ Himself—how do you hope to take life from Him and with full awareness possess within yourself the same Lord who says: “He who eats the bread which comes down from heaven will live forever” (cf John 6:58), and again “The flesh avails nothing; it is the Spirit Who gives life”?

Come, therefore, as many as believe, as many of you as understand the power of the mysteries as we have explained it, as many as have eaten the heavenly bread, as many as from it and through it and in it and with it possess everlasting life. And, in this true life, let us all be caught up in the Spirit to the third heaven; or better, in spirit to the heaven itself of the Holy Trinity. So that, at once seeing and hearing, tasting and smelling and assuredly touching with the hands of our soul everything which has been said—and all that which remains ineffable—we may send up a hymn of thanksgiving to God and say:

“Glory to You, Who have appeared and deigned to be revealed to and seen by us.”