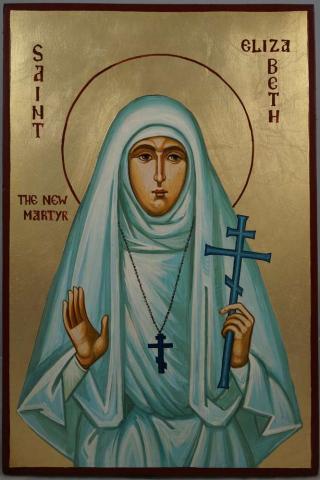 During the twentieth century many names were added to the Church’s roll of holy martyrs. Many of them bore witness to Christ during the Soviet Communist persecution in Russia. One who shines most brightly was a Protestant convert to the Orthodox faith, namely the Grand Duchess Elizabeth. Let’s learn some more about Grand Duchess Elizabeth the New Martyr, and how she lived her life.

Born in 1864 to Grand Duke Louis IV of Hesse-Darmstadt and Princess Alice (daughter of Queen Victoria), she eventually became the wife of Grand Duke Serge Alexandrovich of Russia, while her sister — Alexandra — was married to Czar Nicholas II.

Although she was born to wealth and privilege, Elizabeth’s upbringing emphasised piety, simplicity, self-discipline and charity to others. Elizabeth would often accompany her mother on missions of charity. Elizabeth grew to be a beautiful and gracious woman and her marriage to Grand Duke Serge Alexandrovich took place in 1884. They were well suited; sharing a deep piety, love of the arts and an enjoyment of the simple life. Once married, Elizabeth immediately began to learn Russian.

Being German, Elizabeth’s religious upbringing had been Lutheran. She was not required to convert to Orthodoxy on her marriage. Her husband deeply desired that she would come to share his faith but he did not push her or even express his desire but left her to make her own decision. Elizabeth was drawn to Orthodoxy from the beginning. Her natural piety recognised that it could find full expression only in the richness of the Orthodox Faith. She studied everything she could find on Orthodoxy and her love for it grew. However, she hesitated to convert because she knew that it would give pain to her family, especially her father. But her own pain in living a lie — remaining outwardly Protestant while her heart was Orthodox — grew daily.

At last in January 1891 she informed her relatives that she had decided to be Chrismated into the Orthodox Church. They did not understand her decision, but she felt she had found a great pearl and that it was not to be bought without a price. Her husband, who had prayed for this, was full of joy, as were the Czar and his family. Elizabeth knew that she had found her true spiritual home.

Her life in Moscow

In 1891 the Grand Duke was made Governor General of Moscow. Elizabeth spent her time working amongst the poor, and visiting hospitals and prisons.

1905 saw revolution taking hold in Moscow. Grand Duke Serge Alexandrovich was in favour of taking stricter measures against revolutionaries and became a target himself. On February 18th 1905, the Grand Duke was assassinated not far from his palace in the Kremlin when a bomb was thrown into his carriage. Hearing the explosion, Elizabeth rushed to the scene. She pushed her way past some women who tried to keep her away and knelt on the snow, collecting pieces of her husband’s body.

After two days of constant vigil beside her husband’s coffin Elizabeth suddenly had the impression that her husband Serge wanted her to visit his assassin and convey his forgiveness. This she did, assuring the man of her own forgiveness also, and begging him to repent. He refused to repent but she left him an icon and a copy of the Scriptures. The warden at the prison later told her that the prisoner had placed the icon on his pillow. This made her smile for the first time since the tragedy. She arranged for a cross to be erected on the site of the assassination, bearing the inscription “Forgive them Father, for they know not what they do.”

Elizabeth devoted the rest of her life to the poor. She sold all her valuables and founded a convent, which she called “The Martha Mary Convent.” (In recent years Prince Charles organised a special concert at Windsor Castle to raise funds for the convent, which has now been restored — Grand Duchess Elizabeth was Prince Charles Great Great Aunt). Elizabeth’s vision for her convent was that it should combine prayer with service to the needy, hence the name “Martha and Mary.” She viewed her sisters as the modern equivalent of the ancient order of non-liturgical deaconesses.

In April 1910, sixteen nuns were tonsured and Elizabeth was elevated to the rank of Abbess. The number of nuns grew to ninety-seven. Much charitable work was accomplished, including caring for the sick and for orphans as well as distributing meals to the poor. Elizabeth often visited a rough area called the Hitroy Market, which was a place known for thieves, prostitutes and unsavoury characters. She loved them and they respected her. Some repented and she helped them. She rescued many children from the area.

1914 saw the beginning of World War 1. In March 1917 the Czar abdicated. Elizabeth was offered a safe passage out of Russia to be united with her family but she refused to leave her adopted land.

On the third day of Pascha 1918, Red Army soldiers (Soviet Communists) came to arrest Elizabeth. Nuns Barbara and Katherine accompanied her. All were exiled to Siberia. Barbara and Katherine were offered their freedom, but Barbara chose to remain with Elizabeth. On July 18th Elizabeth and Nun Barbara were martyred. Along with other prisoners they were thrown down an abandoned mine pit. Hand grenades were thrown down after them. One of the executioners reported that the prisoners were heard singing and praying after the hand grenades were thrown.

When Elizabeth’s body was recovered the following October by the White Army (Monarchists), the fingers of her right hand were formed to make the sign of the cross. Her veil had been used to bind the wound of Duke John who lay near her. She herself had suffered a head wound. The remains of the martyrs were taken first to China but Elizabeth’s family requested that her remains be taken to Jerusalem. This was done and the remains of Elizabeth and Nun Barbara were interred in the Church of Mary Magdalene.

In 1981 both Elizabeth and Barbara were canonised. When Elizabeth’s coffin was opened in preparation for this, a scent of jasmine and honey filled the room. Her remains were partially incorrupt.

A friend of Elizabeth’s sister wrote the following words of Elizabeth: “Rarely has human nature come so near perfection.” Grand Duke Alexander Mikhailovich wrote, “No woman has been more noble, none has left so strong an imprint of her personality on the blood-soaked pages of Russian history.”

Grand Duchess Elizabeth serves as a shining example of the great good that can be achieved by one dedicated woman, and the heights of perfection possible to the human soul. She is a particular example to all converts to Orthodoxy, showing by her example how these heights are open to us all who strive for them.

In 1988, a statue of the Grand Duchess Elizabeth was unveiled on the West Front of Westminster Abbey in London, by Her Majesty Queen Elizabeth II.

July 18th is the Feast Day for the New Martyrs Elizabeth and Barbara.

Read more about the life of New Martyr Elizabeth, Grand Duchess of Russia.