I’d like to share with you the story of a family of first century Christians whose names and history have been forgotten by many, if not most, Christians in the West.

Six sisters, and two sons of the eldest sister, eight people altogether, all of them Samaritan.

These people were in Jerusalem on the day of the Pentecost when the Holy Spirit descended from the Father and sealed the earthly Body of Christ, the Church. On that day, 3,000 people were baptised by the Apostles who had just received the Holy Spirit. 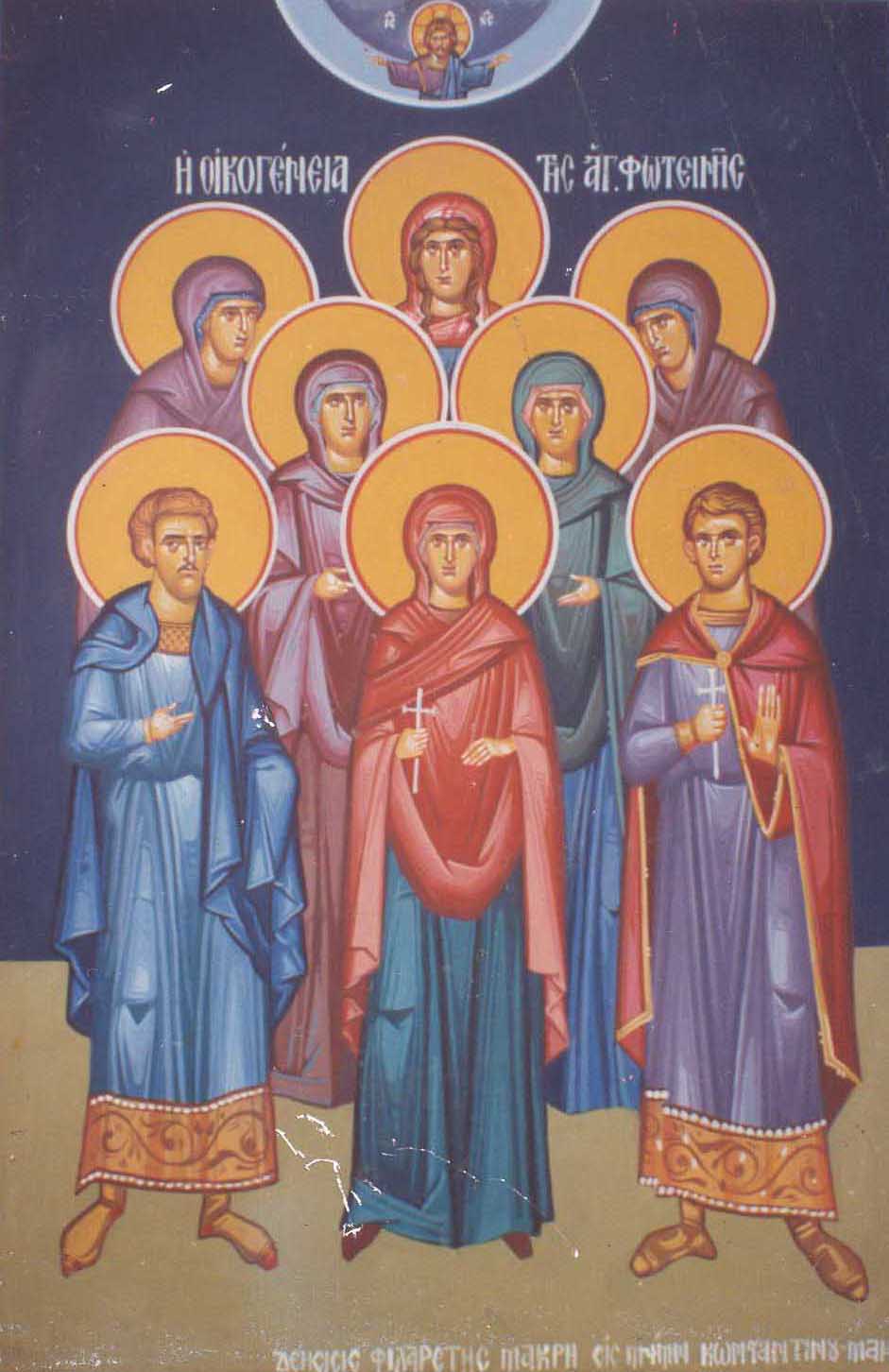 St. Photini and her family

This Samaritan family were baptised among those first 3,000 men and women. As it is customary to give new names to newborn Christians, these eight women and men were given Christian names at their baptism. The eldest sister was named Photini. Her sons were named Photinos and Joses. Photini’s younger sisters were named Anatole, Phtoto, Photis, Paraskeve and Kyriaki.

From there, this Samaritan family went back to Samaria and preached the Gospel for thirty years, diligently and dedicatedly all across Samaria, and later, they moved to Carthage, where they continued their mission. The eldest sister Photini was so diligent and tireless an evangelist, that the apostolic Church remembers her as “Equal-to-the-Apostles.” She was as famous as the Apostles during the thirty years of her mission. While the Apostles spread the Gospel across the entire Mediterranean, Photini and her sons and sisters spread the Gospel in Samaria and Carthage. They were among the first members of Christ’s Body, the Church.

When Emperor Nero took the throne, a merciless and deadly persecution of Christians started. Being a Christian meant facing a death sentence if caught. Great multitudes of Christians were killed all around Nero’s empire—merely because they spread the Gospel and believed in the risen Christ. The Apostles Peter and Paul died during these persecutions.

Because Photini and her family were diligent evangelists and famous, it was only a matter of time before they attracted Nero’s attention. Since Photini was the “leader,” the anger of the Emperor was directed primarily at her.

But these eight Samaritan women and men were tougher than the Emperor expected. The Emperor offered Photini and her family a fortune, position, reputation, power, gold, just to abandon their mission and faith. They refused. Then he invited his daughter Domnia to speak with the ladies, hoping that she would succeed where others had failed. Nero was enraged when he discovered that his plan had backfired, for instead of Domnia encouraging Photini to abandon Christianity, Domnia had herself become a Christian.

Enraged, Nero ordered his soldiers to persecute them. Nero’s soldiers broke their fingers and toes. But the Samaritan family wouldn’t budge an inch. Then they were all crucified and left to hang. But they sang hymns to risen Christ ceaselessly.

Nero’s fury was stoked even greater, so he ordered all the sisters and both sons of Photini Equal-to-the-Apostles to be killed before her eyes. Photini had to watch her sisters and children being ripped apart, beheaded, flayed, quartered. But nothing could compromise her faith. She was still absolutely confident in Christ and stubbornly refused to come to terms with the Emperor.

Since nothing worked, the soldiers flayed Photini and threw her into a well. In this well, she spent weeks before she died, still tirelessly praying and singing and proclaiming the glory of the risen Lord!

The apostolic Church never forgot her martyrdom and they made sure to write down the biography of Photini and her sons and sisters, including their names and most importantly, their example of faith and their martyrdom.

We live in the 21st century now and we are SO UNLIKE those first Christians who died like flies under Nero (and later) just because they were Christians. We moan a lot, we need coffee, or chairs in churches (we can’t stand that long!), it’s too hard to get to church if it is raining, or if it’s too hot, but those first Christians, many of them martyrs, suffered constantly. They were tortured and persecuted and killed. They watched their children, parents and siblings being cut to pieces, cooked alive, flayed or thrown to the lions or crocodiles, and they never even cried!

Greater than life, fearless and confident, they are true heroes of the faith. The Church is built on the blood and bones of these first martyrs—the Apostles included—because if these Christians had ever given up their faith in Christ during torture, that would have been the end of the entire Christian mission! But they didn’t, their faith was not even once shaken!

Do you know who Photini is? Here’s a clue. 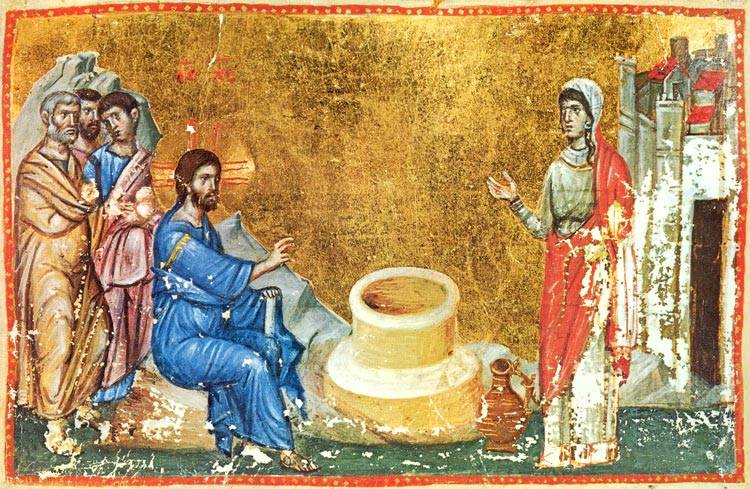 St. Photini at the well with Christ

Photini was the Samaritan woman who met Christ at the well (John 4).

Already there you can read that this sinful woman immediately repented, accepted Christ, believed in Him, and then straight away started her mission!

The Apostle John meticulously describes how she brought the Gospel to her people. In the gospel of John, the Samaritan woman was an apostle before the Apostles, long before the Pentecost in Acts 2!

Pay attention to the promise Jesus Christ makes to her in John 4. “True worshippers will worship God in Spirit because God is Spirit.” Photini and her family found this promise fulfilled when they were baptised with the 3,000 at Pentecost.

Photini the Samaritan woman, Equal-to-the-Apostles and Great-Martyr of the faith, met Christ at the well. And she died for Him in a well.

Although almost the entire Western Christian world has forgotten Photini, the Orthodox remember her. Make sure you never forget Saint Great-Martyr Photini, the “Equal-to-the-Apostles.” Whenever you read John 4, remember that the Samaritan woman spent more than thirty years as a tireless evangelist. She watched her sisters and sons die in the most horrible ways imaginable. She herself died in a well. But she never lost her faith.

Let’s not ever forget this family again.

Orthodox Christians commemorate St. Photini on February 26, when we pray:

Illuminated by the Holy Spirit, All-Glorious One,
from Christ the Saviour you drank the water of salvation.
With open hand you give it to those who thirst.
Great-Martyr Photini, Equal-to-the-Apostles,
pray to Christ for the salvation of our souls.