God Led Me Into His Church: Part 2 — Peace in the Midst of War

I’d become very self-focused during the intense military training. Now I became much more aware of the others around me and my focus began to turn outward.

At a subsequent OCU retreat, I came into contact with a para-church group called the Navigators, who had a big American military ministry, and who were trying to get a ministry going in the British Army. I was drawn to their level of commitment, their attention to studying the Bible and developing a devotional life. I was then discipled by a young Church of England curate who was working with the Navigators. He was an ex-paratrooper who had been dropped into Egypt during the Suez Canal crisis, then he had studied theology at Cambridge University and gone on to be ordained. He took me under his wing and became my spiritual father for the rest of his life. I owe him an immense debt.

My conversion experience was so strong that all I wanted to do was give up my military career and serve God in full-time in ministry. It wasn't possible because I had ‘signed on the dotted line,’ and Her Majesty required me to fulfil my obligation. But I never lost that sense of call while I serving out my time in the British military.

Eventually, I passed the crucial exam that I had failed and was commissioned into the Royal Electrical & Mechanical Engineers. During my time in the British Army, I served in Malaysia, Germany and Northern Ireland. Northern Ireland would contain experiences that motivate me even now. 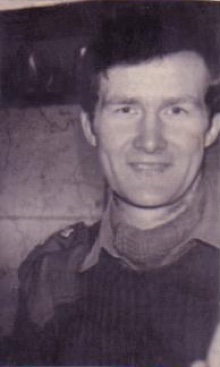 It was while I was serving in Northern Ireland that God inexplicably touched my life.

One of my fellow officers was a bomb disposal officer. I remember sitting down to breakfast with him. I can still see it in my mind. He had scrambled eggs with a tomato on the top. He was very quiet, probably thinking of his wife and two young children back in England. He went off to do his duty as he did every day.

He was called out to defuse a bomb. As he was expertly defusing it, it exploded and killed him. The bomb didn’t explode because of a lack of skill or lack of care. The bomb exploded because it was designed to trigger as it was defused. It was the very first bomb designed this way in that conflict.

Although no one would have known, I was in a state of shock as I sat down to lunch. We all carried on with a stiff upper lip in the British way. But in the middle of that night, I awoke terrified, expecting that the next bomb that went off or the next bullet that flew would have my name on it. I was out of control, perspiring uncontrollably.

But then this scripture came to mind, “Aren’t two sparrows sold for only a penny? But your Father knows when any one of them falls to the ground. Even the hairs on your head are counted. So don’t be afraid! You are worth much more than many sparrows” (Matthew 10:29-31, CEV).

Suddenly I felt like I was being lowered into a cool bath, feet first until this coolness covered me from foot to head. As the cool washed over me I felt a peace wash over me. Perhaps for the first time, I experienced the reality of the Anglican blessing; “the peace of God, which passes all understanding, will keep your hearts and your minds in Christ Jesus” (Philippians 4:7).

Peace in the Midst of War

On another occasion, I was the duty officer for the Headquarters of Northern Ireland Command and one of my duties was to take a small group of soldiers in the middle of the night to check on the security of the Army commander who lived in the suburbs with a small detachment of armed soldiers. We were driving soft-skinned Land-Rovers. On the way to the commander's house, we came across a roadblock formed using wooden logs laid across the road. We all jumped out of our vehicles and took up ready positions when from the other side drove a lone armoured car. When the armoured car had worked it’s way through the log barricade, it stopped and someone in the vehicle told us that they had been shot at on the other side of the logs. I never saw the face of the person in the armoured car but we all heard him speak. Later, talking to the driver of my vehicle, he told me that he usually would have come in the same direction as the armoured car, but had decided to reverse his route on that night. The ambush was laid for us!

I put all the details into the duty officers report and thought nothing more of it until the next day when the Adjutant called me in to describe the armoured car and give him more details. He then told me that there was no record of any armoured cars being in that area at that time and he could not explain it.

Then I realised that, inexplicably, it was no earthly vehicle that had saved us. I have since read of similar instances of divine intervention in other military conflicts. For a second time in that conflict, I felt that the grace of God was with me. Peace enveloped me from then on. I felt at peace throughout the rest of my two tours of Northern Ireland, and have done throughout my life.

To this day I can’t explain why I was spared and my friend was not. I only know that God touched my life, and gave me the peace that passes all understanding. And I turn to those experiences constantly in times of trouble to remind myself that God is with me and has a purpose for my life.

Next: The Gospel and the Church