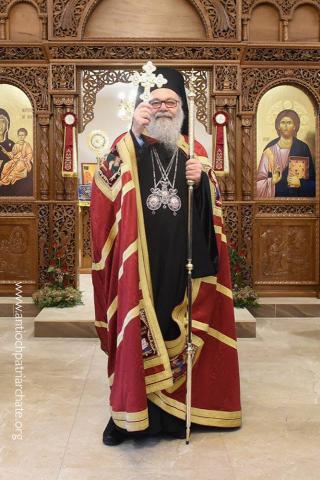 By the Grace of God,

Patriarch of the Orthodox Church of Antioch

It gives me a great pleasure as we are on the Threshold of these holy days; I add my voice to the voices of your hearts. I also pray for the peace of the world and for the welfare of all men. We are entering into this blessed season. We offer our prayer for those who have departed from us and offer our intercessions to our Lord and Creator to bless our lives by His holy name.

Lent is the queen of virtues. This is what we pray in the Orthros of the Meat Fare Sunday; we invite the faithful to receive Lent as queen over our souls, leading them to the shores of salvation:

“Let us go before, O brethren and cleanse ourselves for the queen of virtues; for behold she hath come bringing to us a fortune of good deeds; quenching the uprisings of passion and reconciling the wicked to the Master. Let us welcome her, therefore, shouting to Christ God, O thou who rose from the dead, keep us uncondemned, who glorify thee, O thou who alone art sinless.”
— (Doxastikon of the Praises).

Lent is a means to surrender the hardness of the body to God’s abundant mercies. Through fasting passions are extricated from the soul, so we may experience the warmth of love. Lent is the queen of virtues in as much as we eradicate the evils from our souls and wash them with pure waters of repentance, so we may bring peace and love to others. Love is the summit of all treasures. Fasting is a true expression of love, and the best tool that enables us to remove the passions of animosity and pride, and sharpen the soul with charity and giving, and wash it with repentance and humility, so that the light of the resurrection of Christ may transfigure in it.

The Great Lent is the baptismal font which leads us to resurrection with Christ; this journey begins with the pre-Lenten season, in the humility of the publican and in the return of the prodigal son, as a symbol of man’s return to the heavenly bosom. Lent is abstinence from food so we may feed the poor and the needy. Fasting focuses on the realm of the soul, represented in the holy icon as the icon of the divine glory. The soul seeks the grace divine without which she cannot enter the bridegroom chamber of the Master. She can bypass all difficulties by the power of the cross, climbing the ladder of virtues by the tears of her repentance, and focusing on the haven of the divine mercy. True fasting prepares the inner being of the soul, so the Lord may reside in its innermost depth and move forward, fastened on her Master who destroyed death and bestowed the shining robe of the resurrection on her.

We have come during these blessed days while the East is under the burden of its own cross. We have come while the world is seeking lost peace and is confused in much fear. We have come while we are drowned in the concerns of life and existential despair. However, all that will not prevent us from penetrating our predicaments and from falling down before God, so He may grant us peace, consolation, and heavenly joy.

It is about time that the Golgotha of the East be buried under the footstep of the resurrection. Since the dawn of history, our region has paid blood and souls of its children as a ransom of war and destruction. We call on all peoples of this region and in all countries to meet together and reject anti-religious Takfirism, which is condemned by words and by culture, and keep the inner unity. We, as Christians, have been and continue to be indigenous elements of this region and of our social structures which we belong to; we have a basic role in building bridges of interaction with the other and together carry the burdens of all.

We pray for the peace in Syria, and for the stability of Lebanon; we pray for Iraq and Egypt, Palestine and Jordan, and for the whole world. We pray that peace will triumph over aggression, and that peace will reach into people’s hearts, as conferences are being held for that purpose. As Christians, we are rooted in the East, in the land where Christ was born and whose face will not disappear. The face of Christ is rooted in His birthplace: Palestine. The status and destiny of Jerusalem will not be subject to politics, as it continues to be the goal of all people, especially Christians and Muslims.

Again, we must focus on the status of the two Archbishops of the city of Aleppo, which is reduced as an example of oppression against human beings in this part of the world. Their kidnapping has become a product and an issue in the midst of the market of interests. The two Archbishops Paul and Youhanna were kidnapped in April 2013, and we continue waiting with all those of goodwill, until their file is resolved. What is painful and saddening is that kind of international ignoring or pretending of inability of resolve this issue, in the utmost silence of the world community towards their issue summarizing that of all those who are kidnapped. We pray for them: for all kidnapped, sufferers, martyrs, and those who are forced to leave their homes, as a result of war, terrorism, religious Takfirism.

We represent this genuine continuation of the East, its being and long history. From the East, our Antiochian children immigrated to all countries in the world, carrying their gospel and their church, against all odds. In the East, we stand immovable despite all circumstances, with nostalgia to the remains of our fathers, and the memories of our childhood. In the East, we have been fed our love to our homeland with milk from the breasts of our mothers. Nothing will separate us from our land, for in ‘her’ we dedicate our hearts and beings.

I appeal to you in God’s peace and love, asking Him to bestow His mercies on your hearts and fill your being with His heavenly joy; for He is blessed forever. Amen.

Issued from our Patriarchal Headquarters

Wikipedia defines takfiri as a Sunni Muslim who accuses another Muslim of apostasy. The accusation itself is called takfir, derived from the word kafir, and is described as when “one who is, or claims to be, a Muslim is declared impure.” Accusing other Muslims of being takfiris has become a sectarian slur, particularly since the outbreak of the Syrian Civil War in 2011.

The term Takfiri is the underlying theme behind the attacks, suicide bombings, beheadings, and all punishments. Extremists justify their actions and absolve themselves via invoking the concept of “Takfir.” They’re guilty of genocide, but to them it doesn’t count because they invoke takfirism: they were cleansing the region of infidels.

Takfirism is the understanding under which they feel free to kill would-be fellow Muslims in the Arab world. It is their license to commit whatever violence they want.