The History of Lent 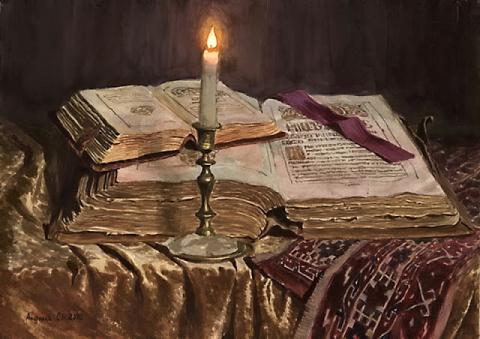 In the seven weeks approaching Pascha, the Orthodox fast and pray during a season that we call, “Lent.” Lent is a practice that has been part of the Orthodox tradition for thousands of years. Let’s discover what Lent is, and learn a little more about its long historical development.

We can divide Eastern Orthodox Lent into three basic periods:

The Pre-Lenten Period, the three preparatory Sundays (the Publican and the Pharisee, the Prodigal Son, and the Last Judgment), followed by a preliminary week of partial fasting, and ending with the Sunday of Forgiveness;

The Forty Days of the Great Fast, beginning on Monday in the first week (or, more exactly, at Sunday Vespers on the evening before), and ending with the Ninth Hour (3pm) on Friday in the sixth week; and

Holy and Great Week, preceded by the Saturday of Lazarus and Palm Sunday.

The third of these three periods, the Paschal fast of Holy Week, is the most ancient, for it was already in existence during the second and third centuries. The fast of forty days is mentioned in sources from the first half of the fourth century onwards. The pre-Lenten period developed latest of all: the earliest references to a preliminary week of partial fasting are in the sixth or seventh century, but the observance of the other three preparatory Sundays did not become universal in the East until the tenth or eleventh century.

The Development of the Lenten Fast

The Paschal Fast in the second and third centuries

In the second century it was the custom for Christians in both East and West to observe, immediately before Easter Sunday, a short fast of one or two days, either on Saturday only or on Friday and Saturday together. This was specifically a Paschal fast in preparation for the service of Easter night. It was a fast of sorrow at the absence of the Bridegroom, in fulfilment of Christ's own words: “But the days will come, when the Bridegroom shall be taken away from them, and then shall they fast in those days” (Mark 2: 20). The fast, whether of one or two days, was in principle a total one, without any food or drink being taken at all. (Today Fasting during Lent indicates abstinence from animal and dairy products, a total fast is sometimes undertaken on Great Friday if health permits)

By the middle of the third century, this Paschal fast had in many places been extended to embrace the entire week from Monday to Saturday. There was, however, no uniformity of practice, and some Christians fasted for less than the full six days. Only a few can have managed to keep a total fast throughout the whole period. In some places it was the practice to eat bread and salt, with water, at the ninth hour (3 p.m.) on the four days from Monday until Thursday, and then to keep, if possible, a total fast on Friday and Saturday; but not all the faithful were as strict as this. In this six-day Paschal fast may be seen the distant origins of Holy Week; but the developed ritual to which we are accustomed, with special commemorations on each day of the week, is not found until the late fourth century. During the pre-Nicene period, there seems to have been a unitary celebration of Christ's death and rising, considered as a single mystery, at the Paschal vigil lasting from Saturday evening until Easter Sunday morning. Friday was kept as a fast in preparation for this vigil, but it had not as yet become a distinct and specific commemoration of the Crucifixion; the Cross and the Resurrection were celebrated together during Easter night.

The Fast of Forty Days

There is no evidence of a forty-day fast in the pre-Nicene period. The first explicit reference to such a fast is in Canon 5 of the Council of Nicaea (325), where it is treated as something familiar and established, not as an innovation on the part of the Council. By the end of the fourth century the observance of a forty-day fast seems to have been the standard practice in most parts of Christendom, but in some places – possibly including Rome – a shorter fast may have been kept.

This forty-day fast, found in evidence from the fourth century onwards, differs somewhat in scope and character from the one-week fast of the pre-Nicene period, and the precise relationship between the two is not easy to determine. It is, however, clear that whereas the pre-Nicene fast was specifically a Paschal observance in preparation for Easter, the forty-day fast was connected more particularly with the final preparation of the catechumens for the sacrament of Baptism or “illumination”. In the weeks before their baptismal initiation, the candidates underwent a period of intensive training, with daily instruction, special services and fasting. The existing members of the church community were encouraged to share with the catechumens in this prayer and abstinence, thus renewing year by year their baptismal dedication to Christ. So the forty-day fast came to involve the whole body of the faithful, and not just those preparing for Baptism.

Lent, as we know it, is thus the result of a convergence between these two elements—between the six-day pre-Nicene fast, which was directly in preparation for Easter, and the forty-day post-Nicene fast, which originally formed part of the training of candidates for Baptism. It was natural that these two elements should become fused into a single observance, for they both have the same endpoint—the night of Holy Saturday. The Paschal vigil on this night, in celebration of the death, burial and rising of Christ, was for obvious reasons chosen as the occasion for administering Baptism; for this sacrament is precisely an initiation into the Lord's Cross and His Resurrection (see Romans 6:3-4).

The Completion of the Pattern

During the sixth to eleventh centuries, the season of pre-Lenten preparation was gradually expanded to include three other preliminary Sundays: the “Sunday of the Publican and the Pharisee”, ten weeks before Easter; following it, the “Sunday of the Prodigal Son”; and then the “Sunday of the Last Judgment” immediately before the beginning of “Cheese Week” (a week of partial fasting when meat is no longer eaten but dairy products are still eaten). Together with the “Sunday of Forgiveness” (also known as “Cheesefare”; this enables us to enter Lent having forgiven others their offences towards us) at the end of “Cheese Week”, this makes four preliminary Sundays in all. In this way the full pattern of the Lenten season was completed.

Today in most parts of the Church there is no organised catechumenate, and it is customary to administer Baptism on many other occasions besides the night of Holy Saturday; yet the baptismal significance of Lent has still a living importance. For every member of the Christian community, Lent is a time of spiritual training and renewed illumination. It is a time to realise afresh that, by virtue of our baptismal initiation, we are crucified, buried and risen with Christ; it is a time to reapply to ourselves the words of St. Paul, “I live, yet not I, but Christ lives in me” (Gal. 2: 20). It is a time for the Orthodox to listen more closely to the voice of the Spirit in whom we were sealed at our Chrismation (Confirmation), immediately after our “burial” in the baptismal waters.

At Rome Holy Week was included as part of the forty days. However, in calculating the number forty all Sundays were excluded from the reckoning, Sundays being considered feast days. This produced a six-week fast of six days in each week, constituting a total of thirty-six days. To make up the full measure of forty days, four further days of fasting were then added at the beginning, with the result that Lent in the West commences on a Wednesday (Ash Wednesday). Shrove Tuesday, the day before Ash Wednesday, was a day when Christians made a special point of self-examination consulting with their spiritual Father on matters requiring repentance and amendment. The word “shrove” means to hear a person’s acknowledgement of sin and assure of forgiveness. The term survives in ordinary usage in the expression “short shrift” by which we mean: paying little attention to a person’s excuses or problems. The day was also for thrifty housewives to use up fat and dairy produce by making pancakes so preparing for the Lenten fast.

At Constantinople, on the other hand, Holy Week - together with the Saturday of Lazarus and Palm Sunday - was not regarded as part of the forty-day fast in the strict sense. At Vespers on Friday evening in the sixth week, immediately preceding the Saturday of Lazarus, the distinction between the forty days and Holy Week is very clearly marked in the existing text of the Triodion: Fasting did of course continue during Holy Week!

Having completed the forty days that bring profit to our soul, we beseech Thee in Thy love for man: grant us also to behold the Holy Week of Thy Passion...

Thus the forty days began on the first Monday in Lent and ended on Friday in the sixth week; then came Lazarus Saturday, Palm Sunday and Holy Week, which, while distinct from the forty days, were treated as part of the Lenten Fast in the broader sense. In this way the forty days and Holy Week together constituted a fast of seven weeks. So it is that Lent begins on Ash Wednesday in Western Christendom, while commencing in the East two days earlier on Monday.

Fasting, neither above nor below your ability, will help you in your vigil. One should not ponder divine matters on a full stomach, say the ascetics. For the well-fed, even the most superficial secrets of the Trinity lie hidden. Christ Himself set the example with His long fast; when He drove out the devil He had fasted for forty days. Are we better than He? Behold angels came and ministered to Him (Matthew 4:11) they are waiting to minister to you too.

(Tito Colliander, Way of the Ascetics)