God Led Me Into His Church: Part 5 — Finding the Orthodox Faith 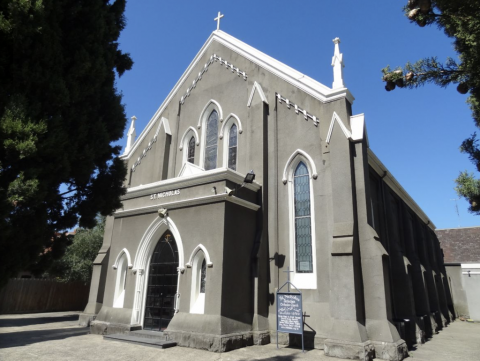 I knew we needed to join the Church. I’d learned from Peter Toon that Christ’s Church exists as a physical reality on this earth. I knew Christ had said the gates of hell would never prevail against it, so I knew that it existed. And I had learned from Michael Harper that the Anglican Communion was simply no longer the Church.

As a Westerner, Roman Catholicism was the obvious choice. However, my dear mother said to me, when I explained my struggles, that she would support any decision I made as long as I didn’t become a Roman Catholic! To be honest, I was shocked at her attitude and put it down to English history. I thought I would probably have to go against her wishes if I wanted to continue fulfilling my call to the priesthood.

But then, during a retreat with some other Anglican priests, I experienced an unbelievably powerful dream. I dreamed that I was part of a group of people trying to defend an ancient building. There were people coming towards us with modern weapons attacking us. Nothing we did could stop them coming and they overran us. Somehow, Queen Elizabeth, the First, was in the fight in all her glory.

In my dream, I ran out of the back of the building to get away from what was happening. There was a vehicle going past. The vehicle had an open top with four men in it with those big, round, black Catholic hats.

They were driving along and I was trying to get onto the vehicle. I cried out to them for help, but they never even looked at me. They just weren’t interested. I tried desperately to get into this vehicle so I could get away, but they just drove on and left me there.

I woke up with my heart nearly coming out of my chest. I thought, “My goodness, what was that all about?" I slowly realised that God was telling me I shouldn't pursue the Roman Catholic Church.

I didn’t want to move to the many breakaway Anglican groups that were forming although the opportunity was there.

The only other option was the Orthodox Church, and I had no idea how to pursue her. 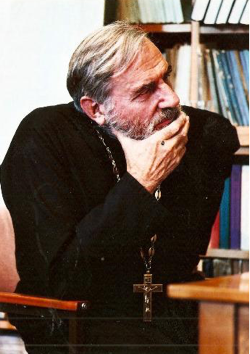 Fr. Michael Harper in his office
in Cambridge

I had some long-service leave due from my time in the Anglican Church, so Janet and I took a trip to England to see our relatives. While we were there, we visited Michael Harper in Cambridge. He arranged for us to meet at the Antiochian Cathedral in London where we attended the Liturgy together. Later we went back to his flat in Cambridge. He then put me in touch with the Antiochian Church in Melbourne.

Back in Melbourne, the first service I ever went to was at St. Nicholas’ in East Melbourne. At that Liturgy, there was Sister Virginia, Father Dimitri and Bishop Gibran. That was it. There was nobody else there!

You would have probably expected me to think, “This isn't going anywhere.” Yet something there drew me in. It reminded me of how God drew me as a cadet at Sandhurst. I can't explain what it was but something about that service drew me in.

Shortly after that Bishop Gibran organised a meeting for conflicted Anglican clergy. Fifty of us met in the hall at St. Nicholas! Bishop Gibran spoke to us. He spoke most eloquently, warmly and graciously. But he warned us that he had no resources. If we came across, we’d be basically on our own, financially speaking.

Now, Anglican priests are used to being paid, having a good stipend, a house to live in and retirement provided for. Bishop Gibran was willing to welcome us but could not pay us. I could see there was a lot of interest in Orthodoxy, but once the priests realised there was no income, a lot of them couldn’t see how they could find their way to come across.

Neither could I. I couldn’t see how I could support my wife and two sons. Yet I knew I had to belong to Christ’s Church. 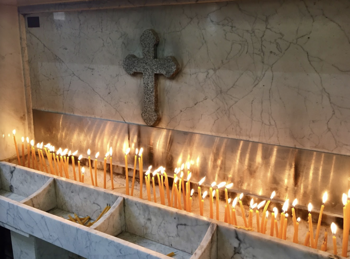 I had a range of issues to sort out. For example, why does Orthodoxy use incense? Was it important? Also, why is Mary so highly honoured? I had to work through these issues.

I realised that the question behind all my questions were, “Is Orthodoxy Christ’s Church?”

Through my reading, study and prayer I eventually realised that it was. Then my Evangelical struggles with Mary’s place in the Orthodox Church evaporated. Mary’s Magnificat predicts that every generation would bless her. Evangelicals don’t bless Mary, but I could see that the Orthodox do. So, over a period of time, my reservations evaporated.

At the same time, I was being drawn by this otherworldly Liturgy. The Orthodox Liturgy is deep and rich, the services are beautiful, the icons draw you into the heavenly presence, and the reality of the communion of saints being present with us pervades everything.

In the end, I didn't leave the Anglican church because of women's ordination. Rather, I left it because I was drawn to the Orthodox Church. I was attracted to Orthodoxy more than being pushed out of Anglicanism. I wasn't just running away; God was actually drawing me into His Church. I knew I’d found the Church.

The time came for me to explain my decision to the churchwardens at St. Luke’s, then the committee, and finally to the congregation. There were some interesting reactions. Someone said, “He can't become Orthodox. He's English.” 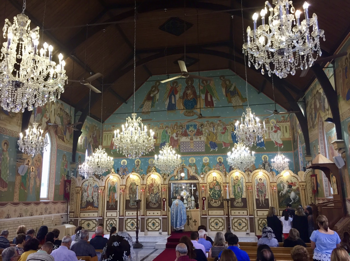 Finally, it was my turn to receive a “Welcome Home!”

I was received into the Orthodox Church in early 2000. Archbishop Paul Saliba, of blessed memory, had indicated that I would spend three years as a deacon before being considered for the priesthood.

That sounded like a small price to pay to gain such a rich treasure.

Come the day of ordination, Archbishop Paul stood in front of the congregation and announced that he would ordain me a priest in just three weeks!

That took me by surprise.

Next: Growing in Orthodoxy