God Led Me Into His Church: Part 4 — The Crisis 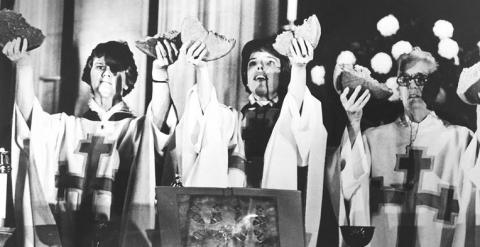 I was called to serve at St. Luke’s in the Melbourne suburb of Springvale North. Having served with young Australians for seven years I felt a real calling to reach the young.

We used the Anglican Liturgy and I wore my vestments during services. We also ran a range of programs aimed at the youth. We had a band. We were the first parish in Australia to introduce the Alpha evangelism program. Alpha was marvellous in helping people come to faith. We also introduced Call to Serve — a brilliant discipling course for people in the parish. We grew. We were doing quite well over that decade. 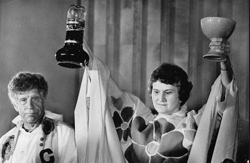 But then, out of the blue, came the whole push for women’s ordination.

This is where Peter Toon’s training made me stop and think, “What is happening here? 2,000 years of church history and suddenly we are going to change something like this? If this was so important, why hadn’t Jesus told us about it, and why hadn’t the Holy Spirit told us about this during the last 2,000 years?”

I was in a real quandary in understanding which position I should take on the issue. At that stage, I had two Anglican theological heroes; John Stott and J. I. Packer. I decided that I’d go in the direction they headed. To my dismay, John Stott was in favour of women’s ordination and J. I. Packer was decidedly opposed to it. God wouldn’t let me ride on their coat-tails!

So I had to do my own reading and thinking, looking at and examining both sides of the issue. One of the books I picked up was entitled, “Equal and Different,” by Revd. Michael Harper, a Church of England priest. The book was a brilliant analysis of the theological and historical arguments for and against women’s ordination.

When Michael Harper began researching for the book, he was himself undecided about the topic. By the time he completed it, he had become convinced that the Church’s 2,000-year-old tradition was that men and women represent different aspects of God’s character and that we have different, complementary and equally important roles to serve in the Church.

Through this book, I learned that women’s ordination was not a new issue. I learned that there had been a series of heretical groups over the years who had appointed female priestesses, but the one, holy, catholic and apostolic Church never had.

The issue came to a head with a vote in my archdiocese. I attended the synodal meeting that was to vote on the issue. The vote was so close that it could not be called on the voices. Each side was yelling as loud as they could. A division had to be called. Those for women’s ordination walked to one side of the room and those opposed to the other. The two groups had to be counted. Turns out women’s ordination carried the room by a single vote. 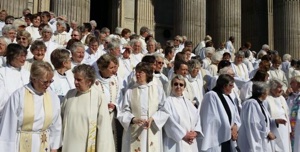 Those on the winning side cheered. But soon they turned and some of them began jeering us.

I wondered, “Where is the Holy Spirit in this decision?

“Where is the peace, joy, love, patience, kindness and goodness that makes someone want to turn and jeer fellow Christians with a different view?

“Where is the kiss of peace?

“Whose spirit is present driving this decision?”

The Anglican way is democratic, so I tried to accept the decision. But try as I might, I got more and more conflicted. One day I was working to prepare a young man for confirmation. His mother talked to me about this whole issue of women's ordination. She didn't believe in it. She was wondering why on earth we had it and how could we justify it. I tried very hard to tell her how they had arrived at the decision to have it. The whole effort left me feeling highly conflicted.

I thought, “What on earth am I doing? I don't believe this. Why am I trying to teach it?” I realised that I couldn't carry on.

“Equal and Different” had pointed out the grave problems in breaking with the Church’s Tradition. Now my archdiocese had done exactly that. But the book provided no suggestion for what I should do now.

Janet and I were on holiday at Philip Island, about 90 minutes drive from Melbourne. I had taken with me Michael Harper’s latest book. This one was called, “The True Light: An Evangelical's Journey into Orthodoxy.”

In that book, Harper evaluated the Church of England against the Christian Tradition. His conclusion was that a church that ordains women and actively gay men to the priesthood, and that ordains bishops who no longer believe in the Incarnation or the Virgin Birth, is no church at all. After being an Anglican priest for 40 years, Harper had decided that any church that departs from such core dogma simply isn’t Christ’s Church.

The Anglican Communion was clearly no longer part of the one, holy, catholic and apostolic Church.

Fortunately, Harper now had a solution. “The True Light” details his discovery of Orthodox Christianity, and traces his journey from Anglicanism to Orthodoxy. I got to the point in the book where he describes being received into the Orthodox Church. They gave him a cake with the words on it, “Welcome Home.” On reading that I burst into tears!

Right at that moment Janet walked into the room, “What's wrong? What's the matter?”

Next: Finding the Orthodox Faith