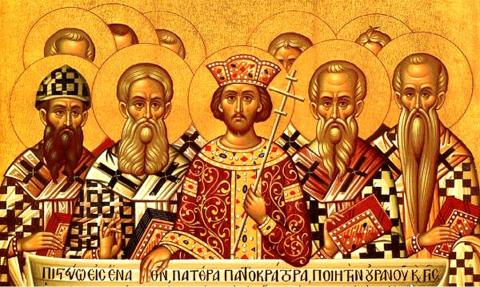 Today I want to discuss a temptation that can debilitate Orthodox Christians. Those caught by this trap are often zealous for truth. But in their pursuit of truth they inadvertently wander from the true faith and pierce themselves with many sorrows.

To explain this, I want to take you back to a day in the mid-fourth century. On this day are gathered many bishops. They have gathered to take a decision regarding a creed. The creed is read in their hearing. It is full of truth: sweet, precious truth directly from the scriptures that compose today’s Bible. There is nothing on the page that is not directly from the Bible. It is all Bible truth. Eagerly the sponsors of the creed request the synod vote. After due deliberation, the synod unanimously vote—to reject the creed.

Why? — How could a faithful Orthodox synod filled with bishops led by the Holy Spirit reject a statement that is truth and nothing but truth?

It seems utterly baffling at first. But sometimes, it seems, truth is not enough.

Christians in the fourth century were recipients of well-established patterns of liturgical worship, prayer and doctrine. Christians prayed the “Our Father” three times a day. They offered the “oblation of peace”—the Body and Blood of Jesus Christ—on a regular basis. And each time they did so, they called on the Holy Spirit to descend on the people, the bread and the wine for spiritual transformation. Baptism was conducted by triple immersion and emersion in the name of the Father, Son and Holy Spirit.

These worship patterns were a direct result of the Apostles’ ministry. Underpinning every one of these traditions were the core theological doctrines taught by the Apostles:

For three hundred years, these core doctrines were embodied in the Liturgy, in Christian prayer, in Eucharistic celebration, and in the hearts and minds of the faithful everywhere.

Now we can’t say that these doctrines were unexamined—because they all came from the Apostle’s direct experience of the Father, Son and Holy Spirit during Jesus’ Baptism, His Transfiguration, His Resurrection and Ascension, and in the gift of the Holy Spirit at Pentecost. This was a lived experience, that was passed on from father to son, from mother to daughter, from bishop to presbyter to deacon to lay people, from generation to generation. This was a living faith arising from direct observation and experience of the Divine.

Yet if someone asked a member of the Church in those years to logically explain what they mean by these doctrines, many members would have seriously struggled. The beliefs being asserted seemed like a logical impossibility! How could a rational mind grasp these five beliefs and hold them together? — They seem contradictory! — At the very minimum, they represent a mystical paradox.

The faithful were content with the mystical paradox of their living faith. They received the peace, joy and fellowship of the Holy Spirit. Their inner lives were adorned by Grace. Many saw the True Light. For them, partaking of the Divine Nature was more than satisfying.

Yet for others, their minds rebelled against this logical paradox. They wanted to search it out; to wrestle it into shape; to somehow shoehorn it into an overall system that seemed to make more sense.

One person who thought like this decided to try to figure things out from the Bible. He was an intelligent man. A presbyter. Highly trained, highly skilled and an expert logician. He went to the accepted writings of the Church—those very scriptures that comprise today’s Bible—to find answers to this mystery.

One day, as he was searching the scriptures for answers to this riddle, he discovered a statement that suggested something entirely new. “This is it,” he thought, “here is the key to the riddle!”

Soon he was preaching his new message, “There was a time when the Son was not!” Jesus is Deity, not by nature, but because the Father—the Only True God—had adopted Him as His Son.

This priest’s name was Arius, and he had stumbled upon a new doctrine that would in the years ahead come to be called, “Arianism.” Arius discovered this doctrine through ‘Bible study.’ He supported it with quotes from the accepted Holy Scripture. And he excitedly, proudly and persistently taught this sparkling new doctrine.

Soon Arius’ Patriarch, the venerable Alexander, called him in for a meeting. The Patriarch listened attentively to his brilliant protege speak on this newly-discovered doctrine. But after hearing everything Arius had to say, the Patriarch rejected Arius’ position. Why? Because Arius’ doctrine was subtlely different from Holy Tradition.

This teaching appealed tremendously to Arius because it was logical. It came with supporting texts from the accepted scriptures of the Church and it made sense. Arius’ brilliant, logical, rational brain could grasp it.

Soon Patriarch Alexander and Presbyter Arius were at loggerheads. Alexander wanted Arius to drop it, “This is not the teaching of the Church!” said Alexander. — “But I can prove it from our scriptures,” retorted Arius. 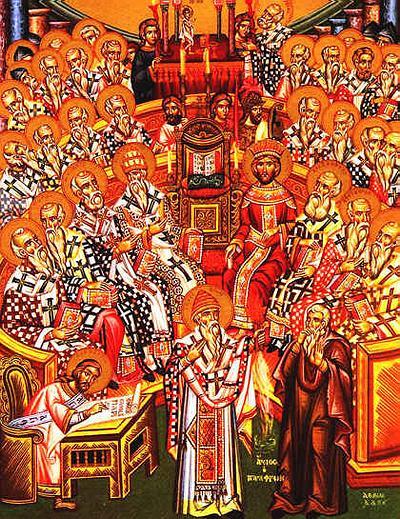 Icon of the First Ecumenical Council in Nicea, 325 AD

The battle was sufficiently intense that the Emperor called together a meeting of bishops to discuss the matter. This meeting met at Nicea in the year 325 AD. It became known as the First Ecumenical Council. The council debated the issue for four days. After hearing from both sides on the first day, the council voted 296–22 against Arius. After several more days of discussion, the final vote was taken, 316–2 against Arius.

Three hundred and sixteen delegates voted that the faith they had received was not the Bible-based, logical and rational doctrine that Arius promoted.

Instead, the received and lived experience of 316 delegates of Nicea pointed in a different direction—the direction that proclaims the Son to be essentially One with the Father. This doctrine had been received by the bishops of the Church since before New Testament scripture existed, because their predecessors had heard it from the Apostles’ lips before any New Testament scriptures were written. The First Ecumenical Council expressed the orthodox understanding by describing the relationship between the Father and the Son as being “of one essence” (homoousian).

It turns out though, that despite this thunderous rejection of Arius’ doctrine, there were some who still wanted to promote it. Over the years, these rogue supporters wrote a number of creeds—four or five creeds in all. The longest one is called “the Lengthy Creed.” Each one of these creeds contains doctrinal statements that are ‘true.’ Each statement can be justified from our scriptures.

Fathers of Nicea I presenting the Creed

Yet whenever any of these creeds were submitted to an orthodox Synod, they were rejected. They were rejected—not because of the self-evident truth they contained—but because they omitted the one word that was intended to differentiate between the Church’s teaching and Arius’ novel idea.

Truth and nothing but the truth are sometimes not enough. What was missing from these Arian Creeds was The Whole Truth.

The Whole Truth had never been derived from a logical analysis of our scripture. The Whole Truth had come from the inspired testimony of the Apostles. Men who had seen, heard and touched the Truth. Men who reported what they knew of Jesus’ Baptism, His Transfiguration, His Resurrection and Ascension, and of the Descent of the Holy Spirit at Pentecost. And the Church received signs and wonders accompanying their testimony to validate that what they said was of God.

The Orthodox Church has often reflected on this history, drawing a number of lessons from it. Firstly, at the core of the true faith is a mystical paradox. We aren’t called to explain this paradox, but to experience it through prayer, liturgy, baptism, confession, unction and Eucharist. Secondly, if someone is teaching a novel doctrine—even when the novel doctrine has scriptural “proof”—then the doctrine should be rejected. It is heresy. Thirdly, there are times when someone teaching only truth must indeed be rejected. Merely because someone’s teaching is true is no guarantee that their teaching is orthodox. You see, someone can teach truth by teaching only one aspect of a mystical paradox. They may be teaching truth, but are they teaching The Whole Truth?

Christians need more than truth. They need the One Who is Truth.

The Whole Truth is the Father, the Son and the Holy Spirit. They are Three and One. They are beyond us and within us. They are Principle and Person. They are One, and They are He Who invites us to a Loving Relationship.

Now we Orthodox know this history. We know it well.

Today, the Seventh Sunday of Pascha, we celebrate the Fathers of the First Ecumenical Council. We remember the very people who rejected Arius’ novel teaching. But have we learned our lessons well enough? Have we lived deep? Have we sucked this marrow dry?

Many have. But some, I think, may have not.

Why do I say this?

Now I don’t mean to say that we should never listen to someone who is not Orthodox. Not at all. St. Basil the Great advises us to emulate a bee: to take the pollen but leave the poison. But we can only “be the bee” when we understand the Orthodox faith and are consciously living in the presence of the Almighty God Who is Intimately Present.

If we realise that we have been listening to a modern-day Arius—someone whose beliefs are “Bible-based” but un-Traditional—then flee back to the safety of the Church. But when we are filled with “the mind of the Church” (which is the “mind of Christ,” for Christ and His Church are One) then we can safely appreciate glimmers of Truth wherever He appears.