Why do we commemorate St. Cuthbert every week? 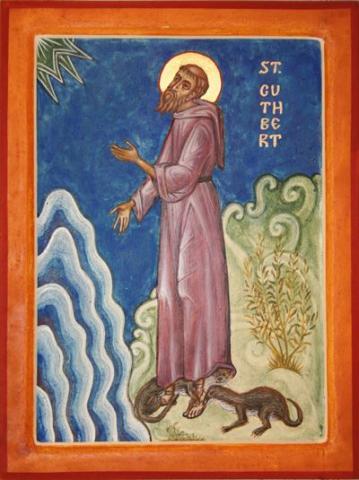 Today (20th March 2022) is the day that we commemorate St. Cuthbert in the Orthodox Calendar so it seems appropriate to deal with this question today.

The parish of St. Cuthbert was a Western Rite Orthoodox parish founded by and served by Fr. Columba of blessed memory, who was an Anglican priest convert to Orthodoxy like myself. Sadly he died some years ago and Metropolitan Paul Saliba asked me to take care of Fr. Columba's parish, as well as the Good Shepherd parish, which I did for some time. To cut a long story short, it was eventually decided to bring the two parishes together with the agreement that we would always commemorate St. Cuthbert, which we do.

So, who was St. Cuthbert?

He was the most famous saint of Britain. Here are a few thoughts on his life and ministry for those who are interested.

Saint Cuthbert was born in Northumberland around 634 A.D. He was educated by Irish monks and was greatly influenced by the holiness of the monastic community of Melrose.

Information about his life and work is to be found in an early anonymous Life of Cuthbert written about AD 700 and manuscripts written by the Venerable Bede, one written around AD 716 and a longer prose version, 'The Life and Miracles of St. Cuthbert' written in AD 721. Both the anonymous (in 7 manuscripts) and Bead's prose Life (in 38 manuscripts) have survived until today.

Following his call to monastic life it seems that the troubled state of the country hindered his resolution, and he is thought to have spent about 4 years as a soldier after which he entered the monastery at Melrose where he became known for holiness and learning. From the start, his life was distinguished by supernatural occurrences and miracles.

When the monastery at Ripon was founded, he went as guest-master, but in AD 661 Roman reforms were introduced which he could not adhere to and, along with other monks who wished to continue the customs of Celtic Christianity, he returned to Melrose. However, it is important to note that following the Synod of Whitby, where a decision was made in favour of Roman Usage, St. Cuthbert accepted the decision and even introduced it to the monastery at Lindisfarne. 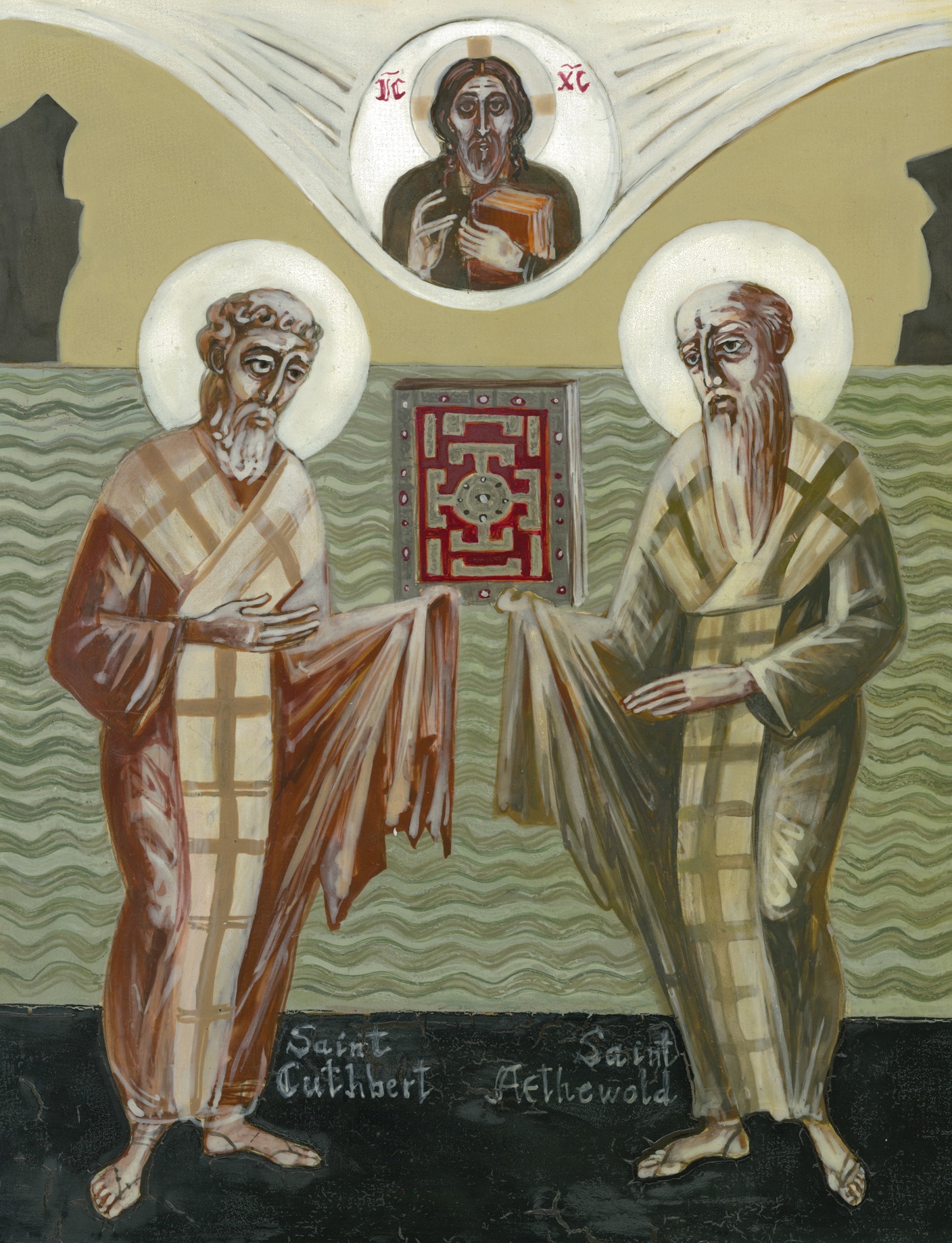 Icon of St Cuthbert, with his disciple St Æthelwold, holding the Lindisfarne Gospel

St. Cuthbert is known to have been an outstanding monk; from AD 664-676 he was Prior of the monastery on Lindisfarne Island (also known as Holy Island). He then retired to the nearby island of Fame to live as a hermit. However, with great reluctance, he was persuaded to accept the bishopric of Hexham in AD 684 and one year later he exchanged this for the bishopric of Lindisfarne. Two years later he returned to his Farne hermitage where he died on March 20" AD 687. He received the last sacraments from Abbot Herefrid to whom he spoke his farewell words. Herefrid is known to have been a source of information to Bede. March 20 is St. Cuthbert's Feast Day.

The relics of St Cuthbert have a particularly well-documented history. We are told that it was the discovery of St. Cuthbert's incorrupt body, which led Bede to write.

St. Cuthbert was buried at Lindisfarne and his tomb immediately became celebrated for miracles so numerous and extraordinary that he was called the "Wonder-worker of England'. In 698 his relics were transferred, and his body was found to be incorrupt.

In AD 875, after the second Viking raid on Lindisfarne, his body was moved to Northumbria and rested at several sites until, in the 10" century, the guardians of St. Cuthbert's remains were instructed, in a vision, to transport the casket to Durham. They did not know where Durham was but were eventually guided to it by a maiden searching for a lost cow! St. Cuthbert' s remains were enshrined at Durham, first in a chapel formed of boughs, then in a wooden chapel and finally in a stone church, built on the current site of Durham Cathedral. William the Conqueror visited the shrine there in AD 1069 and he planned the construction of the Norman cathedral, which was eventually built there.

In AD 1104, during the transferring of the shrine to the present Cathedral, the casket was opened, and the body was found to be incorrupt and sweet smelling. Throughout the Middle Ages Durham was the major pilgrimage centre of the North of England, and Cuthbert the most famous Saint. His shrine was elaborate, and many valuable gifts were enclosed in it.

In AD 1537, during the Reformation in England, the commissioners of Henry VIII were sent to destroy the tomb. Archbishop Charles of Glasgow, who wrote a History of St. Cuthbert, reports that: ­

Dr. Lee, Dr. Hanly and Mr. Blythman on approaching the shrine found many valuables and goodly jewels .... after the spoil of his ornaments and jewels they approached near his body, expecting to find nothing but dust and ashes: but perceiving the chest he lay in strongly bound with iron, the goldsmith ... broke it open, when they found him lying whole and incorrupt with his face bare, and his beard as of a fortnight's growth, and all vestments about him as he was accustomed to say mass.

The monks were allowed to bury him in the ground under where the shrine had been. This was opened again in 1827, at which time a skeleton, swathed in decayed robes, was found. The designs matched those described in the AD 1104 accounts.

The manuscripts written by the Venerable Bede (AD 721) contain many accounts of miraculous occurrences in the life of St. Cuthbert. Most notably, the account of his call to monastic life: He was at the time a shepherd and one night while in prayer as he watched his flock, he saw a long stream of light break through the darkness of the night and in the midst of it a company of angels descending to earth and, having received among them a spirit of surpassing brightness, returned without delay to their heavenly home. When morning came he found that * Aiden, bishop of Lindisfarne, a man of exalted piety, had ascended to the heavenly kingdom at the very moment of his vision. Immediately, therefore he delivered over the sheep to their owners and determined to enter a monastery. (Bede AD 721)

Other stories include the prophesy by a child of his future bishopric, exhorting him to prepare himself for this. We are told that the prophesy had a lasting effect on him and that he began to exhibit an unusual decision both of mind and character, as if the same Spirit which had spoken outwardly to him by the mouth of the boy, were now beginning to exert its influence inwardly in his heart. The Venerable Bede concludes: 'Nor ought we to be surprised that the same God can restrain the levity of a child by the mouth of a child, who made even the dumb beast to speak when He would check the folly of the prophet.' (Bede AD 721)

Another story included in Bede's manuscripts tells how St. Cuthbert changed the winds by his prayers and brought scattered ships safe to land: Some monks had gone up the river Tyne by ship, to collect timber for use in the monastery. On their return a violent wind carried their ships out to sea from the river's mouth. Those who were watching from the monastery launched boats, but they were overcome by the violent storm. The monks turned to prayer but to no avail. Cuthbert was on an opposite bank with a multitude of people who began to deride the manner of life of those who were perishing as though they deserved to suffer! Cuthbert rebuked them for this and knelt to pray. The wind was immediately checked, and the vessels returned to the place of their intended landing. All extolled the faith of Cuthbert and never ceased to extol it. This account came from an onlooker who was described as a man of rustic simplicity, and altogether incapable of telling an untruth. (Bede AD 721)

Other stories include an angelic visit instructing him to apply a poultice to an infected knee and a miraculous supply of warm bread and meat in a remote place after refusing to break his fast to eat before setting out on a journey. (Bede AD 721)

St. Cuthbert was a well-liked and respected man with a caring and peaceful nature. He loved animals and especially birds and seals, who were often his only companions on the lonely island. He was concerned with protecting the Eider duck still known today in Northumberland, in North East England, as St. Cuthbert's duck or 'Cuddy's duck', often seen around Lindisfame. His gifts of healing and miracles brought fame to the islands. While at Lindisfame his efforts were concerned with evangelising the people. He travelled much, preaching everywhere with great energy.

St. Bede has said of him: "So great was Cuthbert's eloquence, so keen his desire to drive home what he had begun to teach, so bright the light of his angelic countenance."

Almighty God, who called Your servant Cuthbert from keeping sheep to follow Your Son and to be a shepherd of Your people, mercifully grant that we, following his example and caring for those who are lost, may bring them home to Your fold, through Your Son Jesus Christ our Lord.

A brief note about St. Aiden seen by Cuthbert as a soul ascending to heaven. Aiden lived from AD 600-651 and became one of the Irish monks on the island of Iona. (Iona had been founded in AD 565A.D. by Columba who was the missionary Irish Celtic Monk who converted the pagan Picts of northwest Scotland to Christianity.)

Aiden was sent as a missionary to the Angles (we get our word English from the word Angle-ish). An earlier missionary monk named Corman had given up on the Angles, saying that they were too uncivilised and stubborn to be Christianised! In 635 Aiden founded the monastery on Lindisfarne (Holy Island). From here he preached to, and brought to Christ, the Angles of Northumbria (Northern England). Aiden loved to talk to pagan Angles about Jesus. He would not ride a horse because it deprived him of opportunities to witness about Christ while he travelled. It was easier to talk to people, he thought, when you were on their level.

'He cultivated peace and love, purity and humility; he was above anger and greed, and despised pride and conceit; he set himself to keep and teach the laws of God, and was diligent in study and in prayer ... I greatly admire all these things about Aiden'