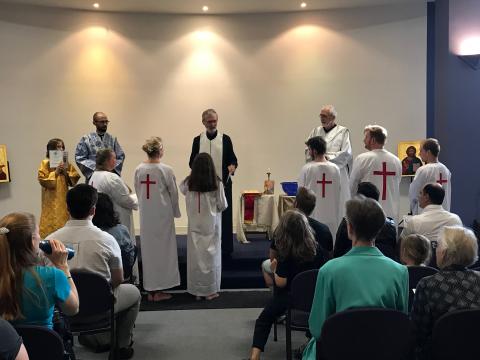 God is on the move. He is calling people from all backgrounds and walks of life into communion with His Church. And He is calling members of His Church to cooperate with Him in this saving activity (1 Corinthians 3:9).

The Good Shepherd was witness to this Divine activity on the weekend before the Nativity. Six adult catechumens were baptised on the Friday and received into communion on Christmas Eve. 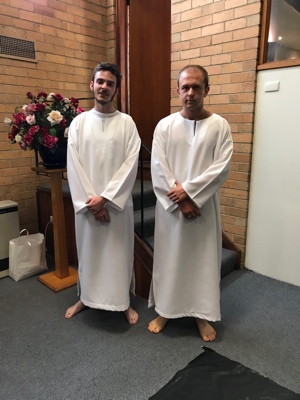 An auto-mechanic and an orchardist
preparing for baptism

The candidates for baptism were from all walks of life. One was a teenager, several in their early twenties, and some middle-aged. Some were from Protestant backgrounds, and some were previously non-believing or actively atheist. All of them have felt the call of God on their lives: to unite their lives with Christ through the waters of baptism and the communion of the Church.

Through history Christ’s Holy Church has taken seriously His command to “go into all the world” and “teach the nations all things” (Matthew 28:18–20).

In the first century Christian missionaries spread the message of Christ far and wide. Starting in Jerusalem, they travelled as far west as Spain, and as far east as India. In the next few centuries, the Gospel of Christ would be preached in the British Isles and China.

In the 860s, the Holy Orthodox Church commenced one of the greatest and most successful missionary endeavours in the history of the Christianity. She commissioned two brothers, Sts. Cyril and Methodius to take the message of Christ to the Slavs. 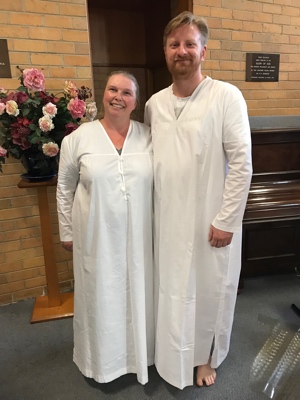 A husband and wife preparing for baptism

Then as now, translating the Liturgy into the local language attracted opposition. In Sts. Cyril and Methodius’ case, they faced the opposition of German clerics. Nevertheless, these faithful saints pressed ahead and taught the Slavs Christ’s message of love and peace in their own language.

The approach bore much fruit, with Christianity spreading throughout Slavic lands. By 988, Vladimir of Kiev and his court were baptised. Pagan worship was rolled back as more and more Russians began converting to Christianity and following Christ.

The message of Christ spread throughout the great landmass of Russia. Bear in mind, Russia covers one eighth of the world’s landmass!

By the 19th century, Christian missionaries were evangelising in the Russian Far East and in Alaska. Just as had been done more than a thousand years before, St. Innocent of Alaska devised a written language and grammar for the local Inuits, and translated parts of the Bible into the local language.

Presenting the Gospel of Christ in the local language and culture has been key to Orthodox Christian mission from Pentecost through to today.

We’re all Australians in Australia

Australia has been home to Orthodox people for almost 200 years. The first Divine Liturgy was celebrated at Kirribilli Point in Sydney in 1820. The first pan-ethnic Orthodox parishes were established in 1898. And the first permanent Orthodox clergy arrived in Australia in 1922.

Orthodoxy’s social and cultural invisibility in Australia must be strongly linked to her worship services predominantly being conducted in Koine Greek, Slavonic and Arabic. This is an unprecedented break with the historic practice of presenting the Gospel, the Bible and the Liturgy in the language of the local people.

Fifteen years ago, The Good Shepherd parish was tasked with the mission of bringing the Orthodox Faith to all types of Australians.

Many Orthodox Christians have benefitted, with many visiting Orthodox finding themselves for the first time able to fully comprehend the Divine Liturgy. But so too, inquirers from Roman Catholicism have been enabled to participate in the rich liturgical, ascetical, and penitential life of the Orthodox Faith.

Protestants are emerging from their sectarianism to discover the catholicity and sacramental life of the Church and a vision of the Holy Trinity as the Lover of Mankind. And a number of people without any kind of faith have been drawn to our Lord Jesus Christ and His Bride, the Holy Church.

None of these movements could have occurred without the presentation of the Gospel, the Bible and liturgical life of the Church in English.

It is time for Orthodox Christians everywhere — whether you’re in an English-speaking parish, or a Greek, Russian, Arabic or any other one — to take seriously Christ’s command to cooperate with Him in “making disciples of all nations, baptising them in the name of the Father, and the Son and the Holy Spirit, teaching them to observe all that I have commanded you” (Matthew 18:19, 20).

No matter what parish you’re from, Orthodox Christianity is not a cultural property, but the life-saving message of peace for the entire world. All Orthodox Christians and all Orthodox parishes in Australia need to find a way to present the Gospel and true worship to our friends, neighbours and colleagues in the most appropriate language and culture for them.

Christ promised that the field is ripe for harvest (John 4:35). The uniting of these six people with the Spirit of Christ is proof that this is true. Many more people will be drawn to the Gospel of Christ through the witness of the Holy Orthodox Church in Australia.

Within Holy Orthodoxy, you will now experience the fullness of the Christian Faith, which is unity with the Father, Son and Holy Spirit.

I was given this verse very early in my journey of following Christ as a young adult and it has always meant a great deal to me. So I pass it on to you all in hope and trust;

God is the one Who began this good work in you,
and I am certain that He won’t stop
before it is complete on the day that Christ Jesus returns.
— Philippians 1:6 Contemporary English Version (CEV)

And from the Psalms;

We don’t deserve praise!
The Lord alone deserves all of the praise
because of His love and faithfulness
— Psalm 115:1 (CEV)

Let us be faithful, because He is — first, middle and last — faithful toward us.