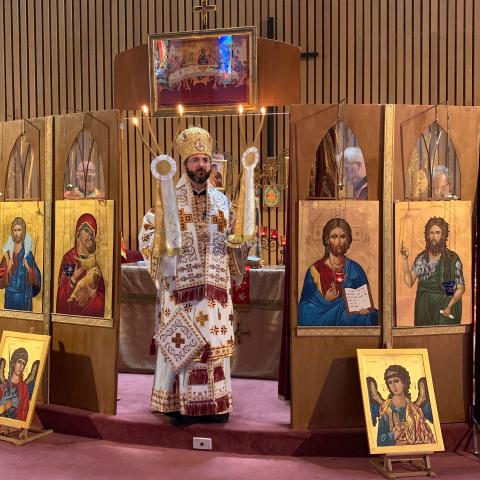 “Joyful” is the most suitable word to describe Metropolitan Basilios’ inaugural visit to The Good Shepherd. His Eminence gently and skillfully guided the choir and the clergy through our first Hierarchical Matins and Hierarchical Divine Liturgy in several years. The entire congregation then retreated to a lunch in honour of His Eminence where we sang for him our traditional celebratory song, “Many Years.” Following the lunch, His Eminence sat with the parish committee for an hour. 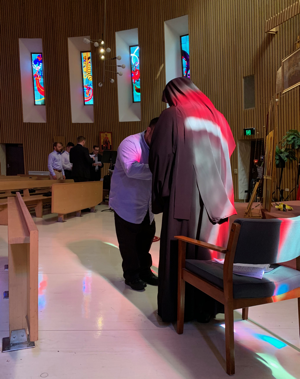 Having our Bishop present within our worship was such a great joy and honour. The Eucharistic Communion is truly complete when the Bishop is surrounded by his Presbyters, Deacons and all the Laity. The wholeness of the entire catholic Church is present in such a gathering. So, it was our greatest joy to host Metropolitan Basilios.

I have asked several people to help flesh out their impressions of His Eminence’s visit. Here’s what they had to say.

“We had a real sense of anticipation regarding the Metropolitan. What would Matins and Liturgy be like? What would he be like?”

“I saw Metropolitan Basilios with prayer rope around his hand during Matins, coloured light streaming through the high windows onto his back. People going up quietly to seek his blessing. There was such warmth flowing between the parishioners and the Metropolitan.”

“There was a real sense of celebration — the parish was clearly part of something much bigger than itself (the Archdiocese, the Orthodox Church).” 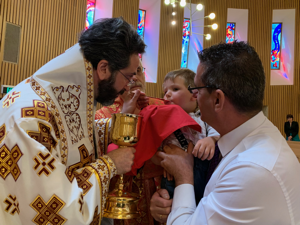 “The overriding impression I gained from my first meeting with Metropolitan Basilios was of a humble, deeply spiritual man, both a pastor and a scholar, who might perhaps prefer a less public life but who has set aside his own wishes in order to serve the people. I honour and respect that sort of sacrifice, and am glad that we have such a Metropolitan to lead us.”

“I observed Metropolitan Basilios’ humble and sincere demeanour, coupled with moments where a joyful smile emerged.”

“His Eminence had a personal word for me during the individual blessing.” 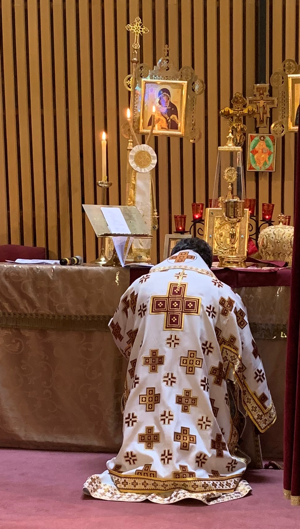 Kneeling in Prayer before the Altar

“I think all of us in the choir were a little apprehensive about how we would fit in with the Metropolitan's style of singing. Obviously, most of the Antiochian churches use a Byzantine style and, given his Syrian origins, it's no surprise that Metropolitan Basilios does too. We on the other hand sing predominantly Slavonic music (we have only a couple of things in Byzantine style). Could the Byzantine and Slavonic styles of singing be made to work together?

Well, in the event they could and did — and remarkably well at that. The Metropolitan proved to be a very capable singer with a full command of the style that he uses. He would start a verse on a particular note and he would employ a lot of melisma (singing syllables over a considerable range of notes) in developing the verse, or intercession, or whatever it might be, but he always brought it back to his starting note at the end of the phrase, so that the choir had only to take his starting and finishing note as the foundation of the first chord of the choir's response for the two singing styles to mesh together quite tunefully - a happy outcome!” 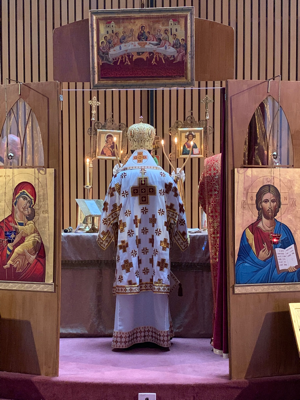 Metropolitan Basilios with the Dikirion
and Trikirion at the Altar

“I was struck by the opening of Metropolitan Basilios’ sermon. He acknowledged The Good Shepherd as the most successful mission in the Archdiocese. He ascribed this success to the work of the Holy Spirit, the blessing of Metropolitan Paul of thrice-blessed memory, and the constant effort of Fr. Geoff, which has led to many Orthodox converts.”

“I loved hearing everyone sing ‘God grant you many years’ with great gusto during lunch, to mark Metropolitan Basilios' first anniversary of his consecration as bishop, 3 year old Luke’s birthday that week, and other name days and anniversaries.”

“I see the visit as recognition from the Metropolitan of Fr. Geoff's ministry and as a sign of the parish's ‘coming of age.’ No longer should we see ourselves as belonging to a little struggling mission, but a fully fledged parish, open and welcoming for all who enter and seek the salvation of their soul. I hope that we will see increased connection and partnership between the parish and the Archdiocese.” 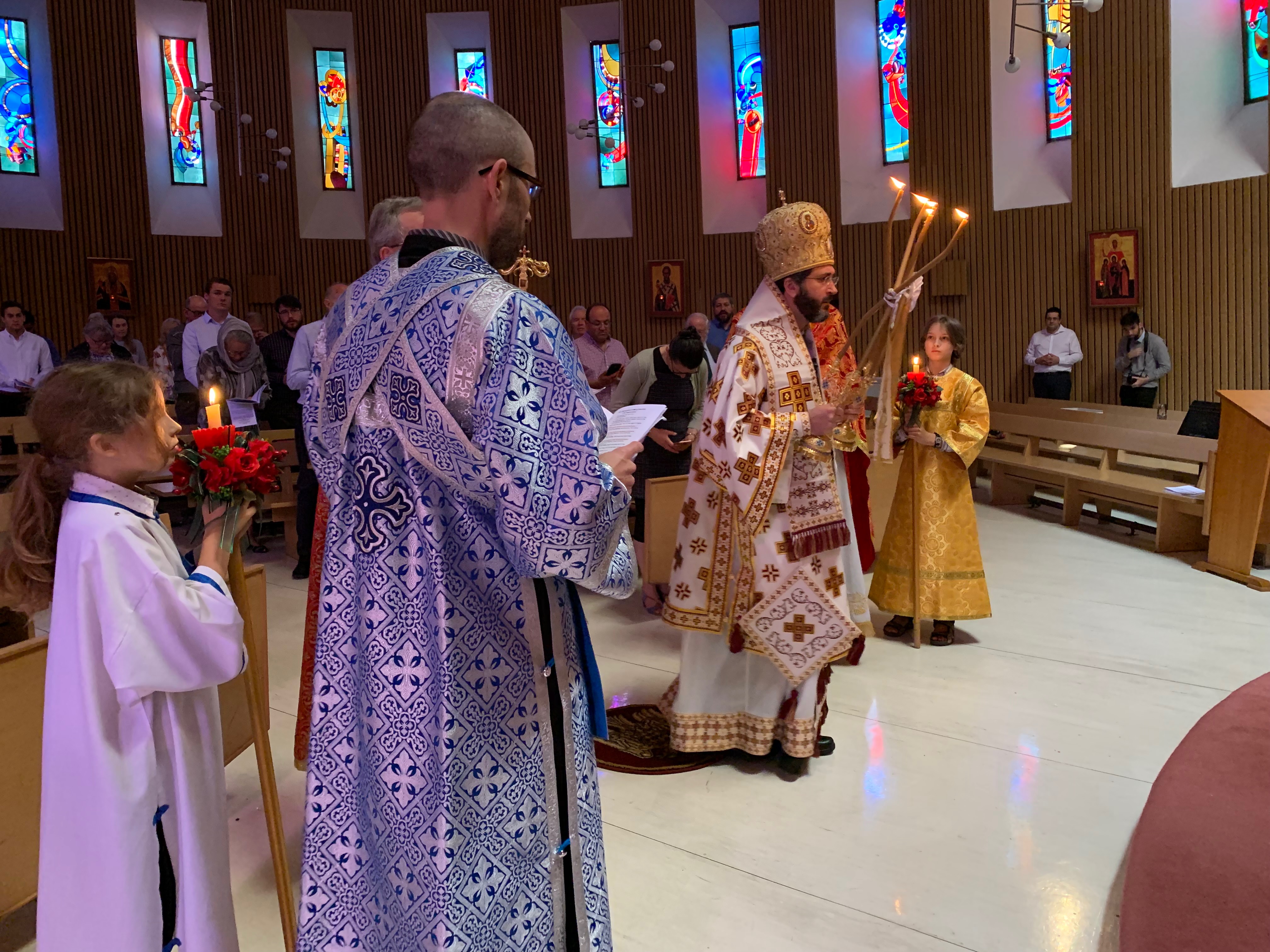 During the sermon, His Eminence spoke about the connection between the figure of The Good Shepherd and the person and role of the Bishop. He explained that the vestment worn around his neck represents a sheep, which is a symbol that shows us his ministry is focused on carrying the sheep that is lost and needs salvation. This is a revelation to us of the One and True Shepherd in the Church, Jesus Christ Himself.

We also want to send a massive, ‘Thank you’ to Mannix College. Not only did they house Metropolitan Basilios during his stay, but they also catered for our lunch. While we have on occasion used Mannix College’s Chapel when The Religious Centre was unavailable, this was the first time we have had a significant gathering at Mannix College. We thank them for their hospitality. 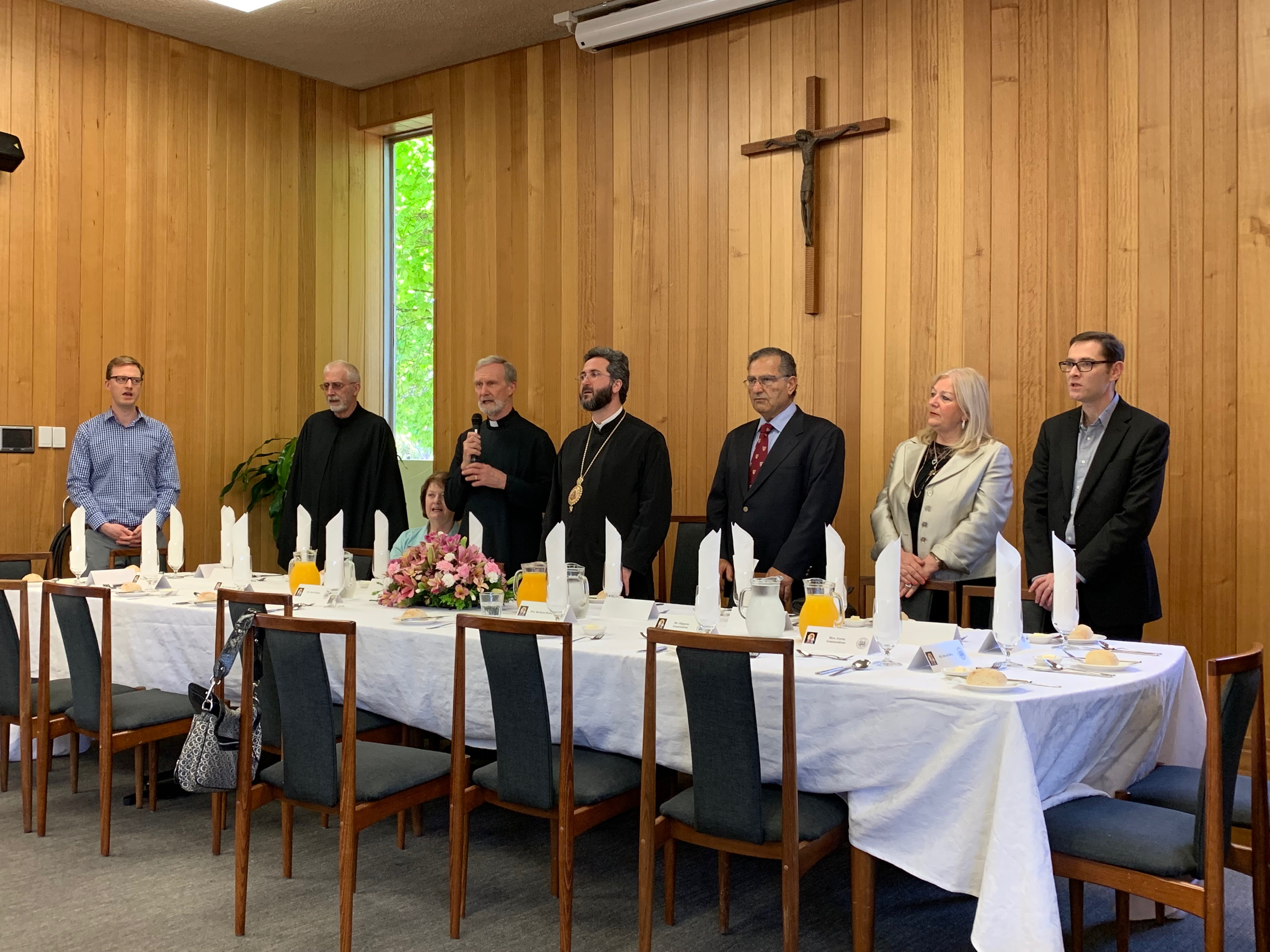 On a personal note, it was a special joy for all the clergy to serve with His Eminence. We look forward to serving many more Liturgies in the coming years and to continue making Orthodoxy accessible to more and more Australians. There is a real hunger for spiritual food, and an increasing need for the treasures of Orthodoxy to be made accessible to many inquirers who are seeking true spiritual nourishment.

At last count, there were 22 nationalities represented at The Good Shepherd. But as I said that in my speech welcoming Metropolitan Basilios, I realised that we have long ago exceeded that number!

What binds us together is a love for our Lord, Jesus Christ, and our common desire to worship together within the Orthodox Tradition. Our common language—indeed, our “heart language”—is English. It is a great honour to be able to deliver all services of the Orthodox Church in English to our Australian members, catechumens, inquirers and visitors from a truly vast array of nationalities. Truly, the Good Shepherd has been busy gathering His sheep into the fold. It is a genuine Day of Pentecost each time we gather. We are so grateful for our Metropolitan's Blessing, support, guidance and fellowship. May there be many more days like this one in the future! 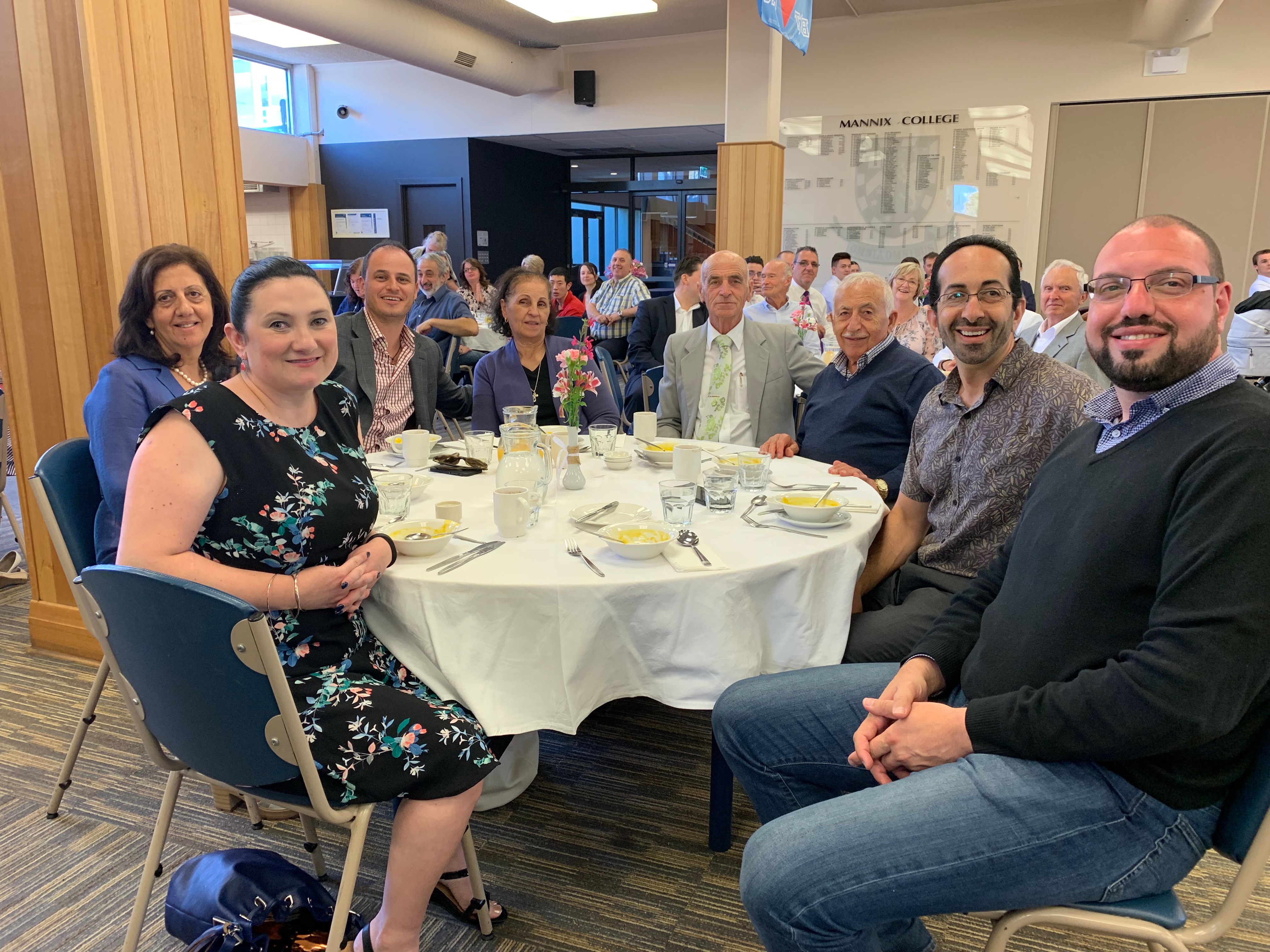 Congregational Tables at the Reception at Mannix College