The Grace of the Holy Mystery of Repentance 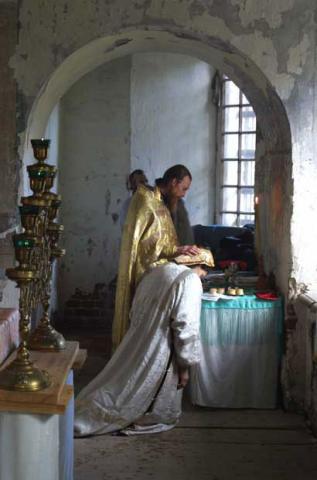 Learning to live a life of repentance is aided greatly by the Holy Mystery of Repentance. Commonly called “Confession,” it brings enormous relief from the burden of sin.

Sin erects a barrier that feels like it cuts us off from God, interrupting our intimacy with Him. Confessing our sins to Christ and being assured they are forgiven restores intimacy.

Orthodox Christians directly approach God in prayerful confession. They can choose to confess to Christ in private prayer or do so in the presence of a priest. Either way, they may have assurance that Christ is ready and able to forgive the sin of a repentant Christian.

When said privately, some Orthodox Christians use penitential prayers in their daily prayer rules. Often this approach to confession is sufficient to restore their relationship with God.

Yet there are times when private confession seems insufficient to restore our relationship with God. It is not a “failure of faith” to deeply feel the touch of sin upon the soul—it is a natural experience.

The Holy Mystery of Repentance is a service offered by the Orthodox Church to assure communicants that their sins are absolved.

It is difficult to adequately express in words the effects of confession. Someone may come to confession feeling disturbed, isolated and beaten down. Their prayer may feel strained.

Yet following confession, the person may feel cleansed. Their body and soul may feel lighter. They may feel free and walk with a lighter step. Their burden is lifted and their intimacy with God restored. The enormous relief of repentance and absolution is one of the most underrated of Christian experiences.

What happens during confession?

Many of us have built our view of what confession is like through seeing it depicted in movies. You might have seen a movie where a priest prescribes a penance that is merely ritualistic. Or, you might have seen him act like a pop psychologist. Neither of these stereotypes even remotely resembles an Orthodox confession.

In an Orthodox confession, the penitent and the priest stand before an icon of Christ. The penitent begins by glorifying God (Trisagion prayers) and then proceeds to the confession itself.

On hearing the confession, the priest may gently ask probing questions to better understand what is being confessed.

He may optionally prescribe a penance (more about that later).

While the penitent is kneeling, the priest then places his stole (epitrachelion) over the penitent’s head and pronounces the words of absolution (more about that later, too).

The Orthodox understand sin to be a result of a moral disorder—a type of disease. Confession is a medicine intended to combat the disease. Penance may be given for healing (not punishment).

Some Christians stand opposed to aural confessions. Some of this opposition comes from a ritualistic or legalistic approach to confession that was prevalent in Western Christianity 500 years ago. Others fear that confessing in the presence of a priest somehow usurps Christ’s role in forgiving the sinner.

While these concerns are quite reasonable given the circumstances in which they arose, neither problem arises in the Orthodox practise of confession.

What is saving penance?

A priest sometimes makes absolution contingent on the penitent performing some task or action. Unlike what we see in movie models, penance in the Orthodox Church is never ritualistic. It is always aimed at challenging and healing the underlying driver that likely caused the sin in the first place. Its purpose is to help the penitent heal from the malady that caused them to miss the mark.

We have mentioned absolution several times already. The words of absolution are pronounced by the priest to assure the penitent that their sins truly are forgiven.

The words of absolution pronounced by the priest are derived from an authority laid down by Christ in Scripture.

In the context of the Church grappling with a sinful communicant, Christ said:

Then Christ says the same thing in another way:

“Again I say to you, if two of you agree on earth about anything they ask, it will be done for them by my Father in heaven. For where two or three are gathered in my name, there am I among them” (Matt 18:19–20).

Where the priest and the penitent are gathered together in confession, Christ promises to honour their agreement and to personally be present within the confession.

This is part of Christ’s gracious plan to offer a light yoke (Matt 11:30). Confession is one of those blessings He bestows through the Church to bring lightness to one’s soul. Through confession, one may receive great relief from moral disease.

What is a confessor

What shaped the Orthodox approach to confession?

“… one has to recall the initial understanding by the Church of the Sacrament of Penance. It was and, according to the essential teaching of the Church, still is the Sacrament of reconciliation with the Church, of the return to her and into her life of those excommunicated, i.e., excluded from the eucharistic gathering of the Church. At first the high moral standard of life expected from the members of the Church, and the very strict ecclesiastical discipline, allowed for only one such reconciliation: ‘After that great and holy calling [of Baptism] if anyone is tempted by the devil and sins, he has but one penance,’ we read in The Shepherd of Hermas, a Christian document of the second century, ‘for if anyone should sin and do penance frequently, to such a man his penance will be of no avail.’ Later on, and especially after the massive Christianisation of the Empire following the conversion of the Emperor Constantine, the discipline of Penance was somewhat relaxed, but the understanding of the Sacrament itself was in no way altered: it was for those alone who were excommunicated from the Church for acts and sins clearly defined in the canonical Tradition of the Church. And that this understanding of the Sacrament of Penance remains that of the Church even today is clearly seen in the very prayer of absolution: ‘…reconcile him (her) with Your Holy Church in Christ Jesus our Lord…’

“Does this mean that the non-excommunicated, the faithful were considered by the Church to be sinless? Of course not. It is indeed the teaching of the Church that no one, save God, is sinless, and ‘there is no man who lives and sins not.’

“The real need for the Sacrament of Penance [is] … a deep spiritual renewal, the true reconciliation with God and a return to His Church from which we are indeed so often excommunicated by the hopeless secularism of our existence. We shall rediscover the spiritual meaning of the penitential sessions of the Church—Great Lent, pre-Christmas Lent, etc.—which are the proper times and the proper seasons for sacramental Penance. We shall rediscover in ourselves the need for real spiritual guidance. And above everything else, we shall—with fear and joy, spiritual trembling and faith—rediscover the Sacrament of Christ’s Body and Blood as the very source and the constant focus of our life as Christians!” 1

If our lives have been given for repentance, the Holy Mystery of Repentance is a vital aid in learning repentance. It encourages us to seek a deeper repentance than would be safe without it. And it provides us, in the form of a patient confessor, someone who can help us discern the Lord’s work and will in our lives.

Confession plays a vital role in preparing ourselves to offer to Christ true repentance.