Today we commemorate the “Triumph of Orthodoxy,” the restoration of the holy icons in the reign of the holy Empress Theodora. Join us in this celebration at The Good Shepherd Orthodox Church this Sunday.

Join us in celebrating the Divine Liturgy on this first Sunday of Lent.

O Christ our God, begging forgiveness of our sins, we venerate your pure image O Good One. Of Your own will You condescended to ascend upon the Cross in the flesh and delivered those you created from the bondage of the enemy. Therefore, thankfully we cry out: When You came to save the world You filled all things with joy, O our Savior.

The undepictable Word of the Father became depictable when He took flesh of you, O Theotokos; and when He had restored the defiled image to its ancient state, He filled it with divine beauty. As for us, confessing our salvation, we record it in deed and word.

About the Triumph of Orthodoxy

The Sunday of Orthodoxy is the first Sunday of Great Lent. The dominant theme of this Sunday since 843 has been that of the victory of the icons. In that year the iconoclastic controversy, which had raged on and off since 726, was finally laid to rest, and icons and their veneration were restored on the first Sunday in Lent. Ever since this Sunday has been commemorated as the “Triumph of Orthodoxy.”

Icons are not optional devotional extras, but an integral part of Orthodox faith and devotion. They are held to be a necessary consequence of Christian faith in the incarnation of the Word of God, the Second Person of the Trinity, in Jesus Christ. 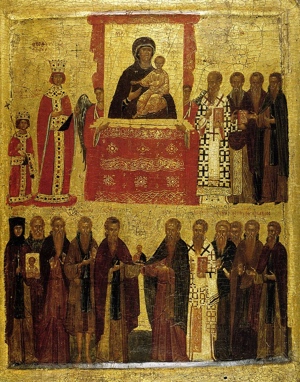 In the Old Testament, Israelites are expressly forbidden to make depictions of God. Yet in the New Testament, we find Jesus being described as the express image (literally: icon) of the Father (Hebrews 1:3). The Father Himself made the image that He had forbidden people to make. And because His Image, Jesus, is truly man, we too may make images of Him. So the use of icons is rooted in the history of the Incarnation, and in our testimony that Jesus Christ is simultaneously truly God and truly man.

Almost a century before the Seventh Ecumenical Council, the iconoclastic controversy had shaken the foundations of Church and State in the Byzantine empire. Excessive religious respect and the ascribed miracles to icons by some members of society approached the point of worship (due only to God) and idolatry. This instigated excesses at the other extreme by which icons were completely taken out of the liturgical life of the Church by the Iconoclasts. The Iconophiles, on the other-hand, believed that icons served to preserve the doctrinal teachings of the Church; they considered icons to be man's dynamic way of expressing the divine through art and beauty.

The Council decided on a doctrine by which icons should be honoured (i.e. venerated) but not worshipped. In answering the Empress' invitation to the Council, the Patriarch of the West, Pope Hadrian, replied with a letter in which he also held the position of extending honour to icons but not worship, the last befitting only God.

The decree of the Council for restoring icons to churches added an important clause which still stands at the foundation of the rationale for using and venerating icons in the Orthodox Church to this very day:

“We define that the holy icons, whether in colour, mosaic, or some other material, should be exhibited in the holy churches of God, on the sacred vessels and liturgical vestments, on the walls, furnishings, and in houses and along the roads, namely the icons of our Lord God and Saviour Jesus Christ, that of our Lady the Theotokos, those of the venerable angels and those of all saintly people. Whenever these representations are contemplated, they will cause those who look at them to commemorate and love their prototype. We define also that they should be kissed and that they are an object of veneration and honour, but not of real worship, which is reserved for Him Who is the subject of our faith and is proper for the divine nature. The veneration accorded to an icon is in effect transmitted to the prototype; he who venerates the icon, venerated in it the reality for which it stands.”

An Endemousa (Regional) Synod was called in Constantinople in 843. Under Empress Theodora. The veneration of icons was solemnly proclaimed at the Hagia Sophia Cathedral. The Empress, her son Michael III, Patriarch Methodios, and monks and clergy came in procession and restored the icons in their rightful place. The day was called "Triumph of Orthodoxy." Since that time, this event is commemorated yearly with a special service on the first Sunday of Lent, the “Sunday of Orthodoxy.”

We are a vibrant Australian Christian community under the direction of the Antiochian Orthodox Archdiocese of Australia, New Zealand & the Philippines, within the jurisdiction of the Greek Orthodox Patriarchate of Antioch and All the East.

All services are in the English language and are held in the Main Chapel of the Religious Centre at Monash University, Clayton Campus, conveniently located in the centre of Melbourne’s residential population.

Parking in the University car parks is free after 7:00 pm, but please take note of all signs regarding Loading Zones, No Standing and Disabled Parking, these restrictions apply and are enforced.