St. Gregory Palamas is a 14th-century saint who emphasised that man can truly know God and can enter into living communion and relationship with Him through Christ and the Holy Spirit in the Church.

He was opposed by a western scholastic who argued that human beings can never be in direct, genuine communion with God. St. Gregory Palamas agreed that the Essence of God is unknowable, yet because God has entered this world through His actions in salvation history, His energies are communicated to people by divine grace and are open to human knowledge and experience. This is what is meant when Christians are said to become “partakers of the divine nature” (2 Pet 1.4).

Join us in remembering the teachings of St. Gregory Palamas on this second Sunday of Lent.

O Gregory the Miracle Worker, light of Orthodoxy, support and teacher of the Church, comeliness of Monastics, invincible defender of theologians, the pride of Thessalonica, and preacher of grace, intercede forever that our souls may be saved.

With one accord, we praise you as the sacred and divine vessel of wisdom and clear trumpet of theology, O our righteous Father Gregory of divine speech. As a mind that stands now before the Primal Mind, do you ever guide aright and lead our mind to Him, that we all may cry: Hail, O herald of grace divine.

On the Sunday of St. Gregory Palamas

Saint Gregory Palamas, Archbishop of Thessalonica, was born in the year 1296 in Constantinople. Saint Gregory’s father became a prominent dignitary at the court of Andronicus II Paleologos (1282-1328), but he soon died, and Andronicus himself took part in the raising and education of the fatherless boy. Endowed with fine abilities and great diligence, Gregory mastered all the subjects which then comprised the full course of medieval higher education. The emperor hoped that the youth would devote himself to government work. But Gregory, barely twenty years old, withdrew to Mount Athos in the year 1316 (other sources say 1318) and became a novice in the Vatopedi monastery under the guidance of the monastic Elder Saint Nicodemus of Vatopedi (July 11). There he was tonsured and began on the path of asceticism. A year later, the holy Evangelist John the Theologian appeared to him in a vision and promised him his spiritual protection. Gregory’s mother and sisters also became monastics. 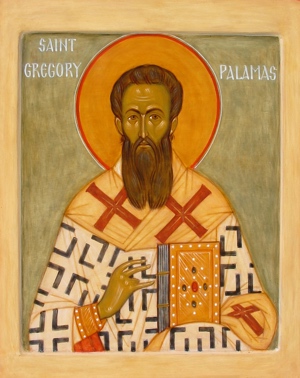 After the demise of the Elder Nicodemus, Saint Gregory spent eight years of spiritual struggle under the guidance of the Elder Nicephorus, and after the latter’s death, Gregory transferred to the Lavra of Saint Athanasius (July 5). Here he served in the trapeza, and then became a church singer. But after three years, he resettled in the small skete of Glossia, striving for a greater degree of spiritual perfection. The head of this monastery began to teach the young man the method of unceasing prayer and mental activity, which had been cultivated by monastics, beginning with the great desert ascetics of the fourth century: Evagrius Pontikos and Saint Macarius of Egypt (January 19).

Later on, in the eleventh century Saint Simeon the New Theologian (March 12) provided detailed instruction in mental activity for those praying in an outward manner, and the ascetics of Athos put it into practice. The experienced use of mental prayer (or prayer of the heart), requiring solitude and quiet, is called “Hesychasm” (from the Greek “hesychia” meaning calm, silence), and those practising it were called “Hesychasts.”

During his stay at Glossia the future hierarch Gregory became fully imbued with the spirit of hesychasm and adopted it as an essential part of his life. In the year 1326, because of the threat of Turkish invasions, he and the brethren retreated to Thessalonica, where he was then ordained to the holy priesthood.

Saint Gregory combined his priestly duties with the life of a hermit. Five days of the week he spent in silence and prayer, and only on Saturday and Sunday did he come out to his people. He celebrated divine services and preached sermons. For those present in the church, his teaching often evoked both tenderness and tears. Sometimes he visited theological gatherings of the city’s educated youth, headed by the future patriarch, Isidore. After he returned from a visit to Constantinople, he found a place suitable for solitary life near Thessalonica the region of Bereia. Soon he gathered here a small community of solitary monks and guided it for five years.

In 1331 the saint withdrew to Mt. Athos and lived in solitude at the skete of Saint Sava, near the Lavra of Saint Athanasius. In 1333 he was appointed Igumen of the Esphigmenou monastery in the northern part of the Holy Mountain. In 1336 the saint returned to the skete of Saint Sava, where he devoted himself to theological works, continuing with this until the end of his life.

In the 1330s events took place in the life of the Eastern Church which put Saint Gregory among the most significant universal apologists of Orthodoxy, and brought him great renown as a teacher of hesychasm.

About the year 1330 the learned monk Barlaam had arrived in Constantinople from Calabria, in Italy. He was the author of treatises on logic and astronomy, a skilled and sharp-witted orator, and he received a university chair in the capital city and began to expound on the works of Saint Dionysius the Areopagite (October 3), whose “apophatic” (“negative”, in contrast to “kataphatic” or “positive”) theology was acclaimed in equal measure in both the Eastern and the Western Churches. Soon Barlaam journeyed to Mt. Athos, where he became acquainted with the spiritual life of the Hesychasts. Saying that it was impossible to know the essence of God, he declared mental prayer a heretical error. Journeying from Mount Athos to Thessalonica, and from there to Constantinople, and later again to Thessalonica, Barlaam entered into disputes with the monks and attempted to demonstrate the created, material nature of the light of Tabor (i.e. at the Transfiguration). He ridiculed the teachings of the monks about the methods of prayer and about the uncreated light seen by the Hesychastsd.

Saint Gregory, at the request of the Athonite monks, replied with verbal admonitions at first. But seeing the futility of such efforts, he put his theological arguments in writing. Thus appeared the “Triads in Defense of the Holy Hesychasts” (1338). Towards the year 1340 the Athonite ascetics, with the assistance of the saint, compiled a general response to the attacks of Barlaam, the so-called “Hagiorite Tome.” At the Constantinople Council of 1341 in the church of Hagia Sophia Saint Gregory Palamas debated with Barlaam, focusing upon the nature of the light of Mount Tabor. On 27 May 1341, the Council accepted the position of Saint Gregory Palamas, that God, unapproachable in His Essence, reveals Himself through His energies, which are directed towards the world and are able to be perceived, like the light of Tabor, but which are neither material nor created. The teachings of Barlaam were condemned as heresy, and he himself was anathemized and fled to Calabria.

But the dispute between the Palamites and the Barlaamites was far from over. To these latter belonged Barlaam’s disciple, the Bulgarian monk Akyndinos, and also Patriarch John XIV Kalekos (1341-1347); the emperor Andronicus III Paleologos (1328-1341) was also inclined toward their opinion. Akyndinos, whose name means “one who inflicts no harm,” actually caused great harm by his heretical teaching. Akyndinos wrote a series of tracts in which he declared Saint Gregory and the Athonite monks guilty of causing church disorders. The saint, in turn, wrote a detailed refutation of Akyndinos’ errors. The patriarch supported Akyndinos and called Saint Gregory the cause of all disorders and disturbances in the Church (1344) and had him locked up in prison for four years. In 1347, when John the XIV was replaced on the patriarchal throne by Isidore (1347-1349), Saint Gregory Palamas was set free and was made Archbishop of Thessalonica.

In 1351 the Council of Blachernae solemnly upheld the Orthodoxy of his teachings. But the people of Thessalonica did not immediately accept Saint Gregory, and he was compelled to live in various places. On one of his travels to Constantinople, the Byzantine ship fell into the hands of the Turks. Even in captivity, Saint Gregory preached to Christian prisoners and even to his Moslem captors. The Hagarenes were astonished by the wisdom of his words. Some of the Moslems were unable to endure this, so they beat him and would have killed him if they had not expected to obtain a large ransom for him. A year later, Saint Gregory was ransomed and returned to Thessalonica.

Saint Gregory performed many miracles in the three years before his death, healing those afflicted with illness. On the eve of his repose, Saint John Chrysostom appeared to him in a vision. With the words “To the heights! To the heights!” Saint Gregory Palamas fell asleep in the Lord on November 14, 1359. In 1368 he was canonized at a Constantinople Council under Patriarch Philotheus (1354-1355, 1364-1376), who compiled the Life and Services to the saint.

We are a vibrant Australian Christian community under the direction of the Antiochian Orthodox Archdiocese of Australia, New Zealand & the Philippines, within the jurisdiction of the Greek Orthodox Patriarchate of Antioch and All the East.

All services are in the English language and are held in the Main Chapel of the Religious Centre at Monash University, Clayton Campus, conveniently located in the centre of Melbourne’s residential population.

Parking in the University car parks is free after 7:00 pm, but please take note of all signs regarding Loading Zones, No Standing and Disabled Parking, these restrictions apply and are enforced.