The attitudes that are driving the euthanasia lobby are already causing real harm for our elderly.

Just a few weeks ago, The Age published an article, “Aged Care Preventable Deaths Surge.” This article discusses how the lack of resources, attention and care towards elderly within nursing homes is contributing to preventable deaths. The Age article cites a Professor Ibrahim, who conducted a study of 23,000 coroner’s records, which concluded that preventable deaths had quadrupled from 1.2 per 1000 admissions to 5.3 per 1000.

The real shock of the article, though, was the reported attitude of Professor Ibrahim’s academic colleagues. The article says,

His study met stiff resistance from some academic colleagues, who suggested he was wasting his time on the elderly. "Anonymous reviewers and journals use words like 'misguided'," Professor Ibrahim said. "They say, 'Old people are going to die anyway, so there's no such thing as a preventable death' ... or, 'The subject matter isn't of sufficient interest to be published'."

These attitudes are truly shocking, because they show no care or concern for the sanctity of life. We owe our elderly a debt of care — they looked after us when we were helpless babes, so we need to return the favour when they are helpless in their old age. But the attitudes expressed in the article shows that Professor Ibrahim’s colleagues are failing to see our elderly as human. Rather, they are considering our elderly to be mere statistics, a nuisance best done away with, a mere cost, something to be forgotten. Their attitude expresses no human concern, showing that the spirit that drives the push toward euthanasia represents a deadening of the human soul, a lack of love toward those who are weak and in need of our help.

Euthanasia in Victoria would cause dire social consequences

Euthanasia has had dire social consequences when it has been introduced in other parts of the world. There is every reason to understand that these consequences would also be experienced in Victoria were the proposed Euthanasia bill to be passed by the Victorian Parliament.

Twenty years ago, euthanasia was narrowly passed in the State of Oregon, USA. On 27 June, 2017, Professor William Toffler M.D. from Oregon Health and Science University (OHSU) Portland, Oregon, USA, will be in Victoria speaking on the dire effects of assisted-suicide laws on patients and his profession. He says that, since Oregon narrowly legalized physician-assisted suicide 20 years ago, “there has been a profound shift in attitude toward medical care — new fear and secrecy, and a fixation on death.”

With an assisted suicide/euthanasia bill being drafted to be voted on in the Victorian parliament later this year it is vital that we understand what such a law will mean in practice. I urge those who live in Melbourne to attend if you can possibly do so, because we all need to understand the very real harm that such a bill would cause. This is a timely and important address and a valuable part of the campaign to oppose the proposed bill. 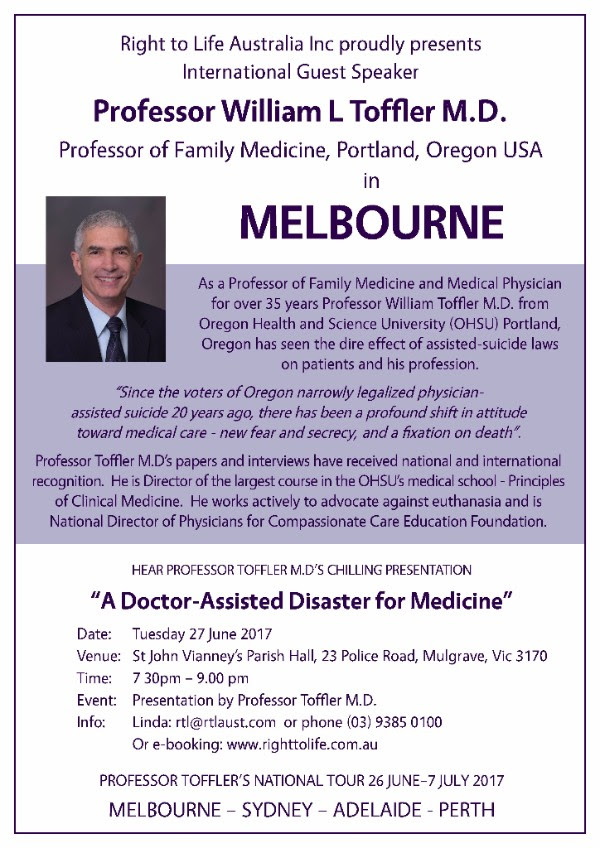 In Tasmania, three Euthanasia bills have been presented to the Tasmanian State Parliament in the last ten years. Each one of those bills has been defeated. Just last year, the Voluntary Assisted Dying Bill 2016 was soundly defeated. This is not a lost cause. The proposed Victorian bill can also be defeated here. Our nation is still a majority Christian nation, as shown by the recently released McCrindle Research paper, “Faith and Belief in Australia: A national study on religion, spirituality and worldview trends,” shows that almost three quarters of Australians are either Christian or warm to Christianity! 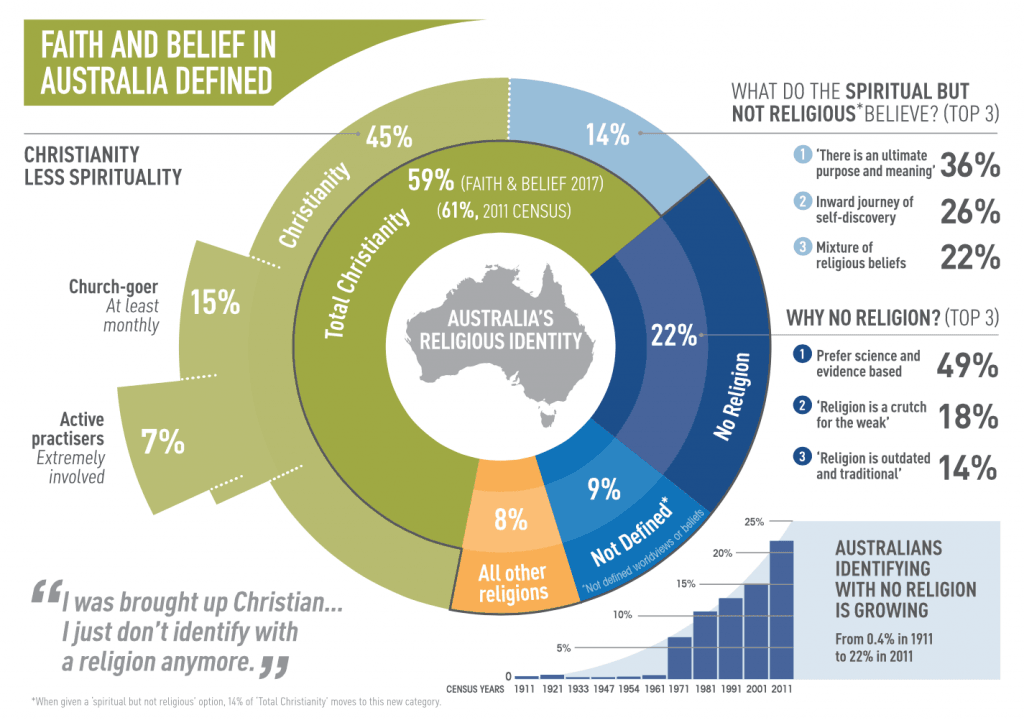 Not only does Christianity respect the sanctity of life, but so too do most faith traditions. Based on population figures, there should be an overwhelming majority of Australians who recognise the sanctity of life. Nevertheless, there is a strong lobby group toward Euthanasia, who actively promote their neo-pagan agenda which stems from economic rationalism and a utilitarian understanding of ethics.

It is because of Christianity that our nation’s laws have respect for the sanctity of life. Before the Church influenced Ancient Rome, honour killings, infanticide and sex selection among new-born infants was common. It was the Christian ethic of sanctity of life that changed these social attitudes and brought about a change in the law. Now the academics and economic rationalists are wanting to take us back to the bad old days. But we have hope, because if there are a majority of Christians in Victoria who are true to the principles of Christianity and understand the implications of it, then this bill will not pass.