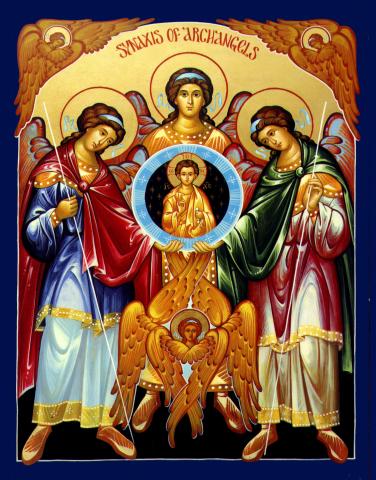 Angels are an important part of Orthodox belief, because we understand that angels are part of the worshiping church. But what are they? Well, the word angel comes from the Greek word for “messenger.” They are beings created by God, who are completely spiritual and have no body — though they are able to assume bodies. At baptism, every Christian is assigned a guardian angel who is to guard, guide and pray for him or her. Let's learn some more about angels and their role in the history of the Church.

Angels in the Bible

The belief in angels is amply attested in the Bible, both in the Old Testament and the New, and they are represented as an innumerable multitude of beings intermediate between God and man.

In Daniel’s vision he describes “thousands of thousands serving the One on the throne, and ten thousand times ten thousand standing before Him” (Daniel 7:10).

We see them on occasions with a specific mission, like to tell Hagar to return to her mistress and to inform her of her pregnancy with a son who was to be called Ishmael (Genesis 16:7).

In Judges 6:11 Gideon is told that he is to deliver Israel from the Midianites. Even though his clan was the weakest he would succeed because God was with him.

In Isaiah’s vision there is mention of the seraphim each with six wings, calling to one another and saying “Holy, holy, holy is the Lord of hosts; the whole earth is full of His glory.” We see here the angels singing praises to God and then touching Isaiah’s lips with a burning coal to cleanse and prepare him to speak to the people (Isaiah 6).

Christ and the Angels

In Matthew 1:20-21 we hear of the angelic visitation to Joseph in which he was told to take Mary as his wife because her conception was of the Holy Spirit.

Luke 1:26 tells us that the Angel Gabriel announces to Mary the birth of Christ.

In Luke 2:9 we read of the appearance of angels to the shepherds, and the accompanying radiance of the glory of God that shone around them — underscoring the divine event that was taking place, the birth of the eternal Son of God in His human nature.

We read in Matthew 26:53 that at His arrest He said “Do you think that I cannot appeal to my Father, and He will at once send me more than twelve legions of angels.”

The book of Hebrews addresses the superiority of Christ over the angels, as there were heresies developing which advocated the worship of angels. Hebrews 1:14 describes them as “ministering spirits sent fourth to minister for those who will receive salvation.”

In Matthew 22:30 Jesus teaches that when we die we become like angels, as in, we become spiritual beings.

In Matthew 16:27 Jesus foretells that angels will accompany Him at His Second Coming.

Christ teaches us that angels continually enjoy the vision of God in heaven and that children have angels assigned to them (Matthew 18:10).

See that you do not despise these little ones; for I tell you that in heaven their angels always behold the face of my Father who is in heaven.

One of the Orthodox Baptism prayers clearly expresses this belief:

Yoke unto his life a radiant Angel, who shall deliver him from every snare of the adversary, from encounter with evil, from the demon of the noonday, and from evil visions.

The Archangel Michael is of particular interest. He is presumed to be the leader of the angels. There are four references to him in scripture: Daniel 10:13 and 12:1 where he is represented as the helper of the chosen people, in Jude 9 he is disputing with the devil, and in Revelation 12:7-9 fighting a dragon. In his icon he appears with a sword.

In Daniel 10:13 he is described as “one of the chief princes,” and in this passage he comes to the aid of another angel.

In apocryphal writings he appears as the great captain who defeated the rebellious Archangel Lucifer and his followers.

In connection with the scriptural and apocryphal writings he was regarded in the Churches as the helper of Christian armies against the heathen and as a protector of individuals against the devil, especially at the hour of death when he conducts souls to God.

His feast day in the East is November 8th, which is known as “Michaelmas Day.”

In the New Testament the Angel Gabriel appears to Zechariah to announce the conception of John the Baptist, also known as John the Forerunner (Luke 1:11-20).

I am Gabriel, who stands in the presence of God and I was sent to speak to you and to bring you this good news.

While I was speaking in prayer the man Gabriel whom I had seen in the vision at the first, came to me in swift flight at the time of the evening sacrifice.

In the East the feast day for Gabriel is the 24th of March, the day before we celebrate the Annunciation.

The Archangel Raphael is found in the Apocryphal writings (Tobit 12:15 ). He is described as one of the Archangels who stands before God and enters into the presence of the Holy One to bring Him the petitions of holy men.

His name in Hebrew means “God has healed.” Raphael is also referred to in connection with the healing of sight and the binding of a demon in Tobit 3:17.

Angels and the Church

In an Orthodox Liturgy we believe that the angels are really there and that the Liturgy is our real entrance, passage and ascension to the Throne of God. To quote Fr. Schemann, a well-known Orthodox writer, “Holy is the word, the song, the reaction of the Church as it enters into heaven, as it stands before the heavenly glory of God.”

The Liturgy of St John Chrysostom contains these beautiful words:

We thank You also for this worship which You have been pleased to accept from our hands, though there stand around You thousands of Archangels and ten thousands of Angels, the Cherubim and the Seraphim, six-winged and many-eyed, soaring aloft upon their wings.

The Litany of the Precious Gifts contains a petition for “An angel of peace, a faithful guide, a guardian of our souls and bodies.”

In the words of the Cherubic Hymn, a song sung during the Divine Liturgy:

Let us who mystically represent the Cherubim and sing the Thrice-Holy hymn to the Life-Creating Trinity...

In the East, each Monday is devoted liturgically to commemorating the angels as the unseen protectors of our lives in Christ.

Learn more about the nature of angels.